Which A-lister was NOT happy with the pregnancy rumors circulating about her? Click below for the answer... 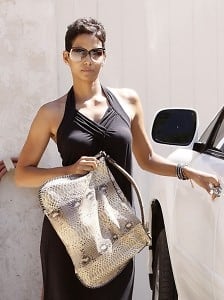 Poor Halle Berry...it's no wonder she was strategically holding a giant purse in front of her waist, after rumors circulated on the internet that she was pregnant with her second child.

She put all pregnancy rumors to bed last night though, when she appeared on the Jay Leno Show in a skin-tight dress, and cleared things up once and for all.