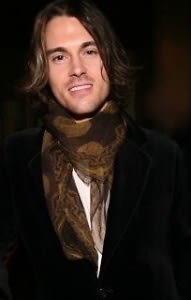 "Poor Lohan's going to jail ... I have such lovely memories of her. I'll never forget the time I was at a benefit speaking to her manager. She rushed towards us & I thought she was going to introduce herself. She put her hand on my shoulder and ... shoved me out of the way because I was blocking her path to Donatella Versace. When she told me to "get out of my way" ... I knew I had been graced by an angel. Sigh ... " -- Keith Lissner, via Facebook

Bravo "The Fashion Show" contestant and Guest of a Guest favorite Keith Lissner on the infamous LiLo, now headed to a 90-day stint in the slammer (followed by an additional 90 days in rehab) for repeatedly violating the terms of her probation and refusing to attend weekly alcohol education classes.

Lohan likely plowed past Lissner at the Whitney Studio Party in October of 2009 (two years after the 2007 drunk driving incident that led to her arrest, probation and, now, jail time). Tactless, but effective: Lohan was photographed canoodling and posing for pictures with the Italian designer later in the evening.