Which television golden boy (who we would have no problem running into) had this to say about his new home here in New York City? Click below for the answer... 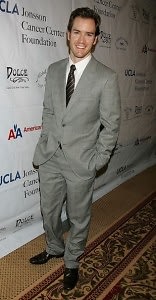 It's true. Zack Morris is in the Big Apple. And with a new gig far from his days of chasing Kelly Kapowski around Bayside High. Mark-Paul Gosselaar is set to star on the stages of Broadway in The Understudy in November and he had a chance to chat with GofG about his new job, his old ones, and his love for New York City:

"I’ve been to New York a couple times for work. I’ve mostly never had the opportunity to walk around the city and I didn’t really understand the city — the streets, the avenues — I didn’t understand any of that because I didn’t have to. I had a bit of anxiety moving out here because I’m a big cyclist — I race my bike when I’m not working — so I brought my bike and thought, “How am I going to ride here?” I’ll tell you: This city, for riding bikes, it’s one of the best places I’ve ever ridden. The efficiency this city has with the subways and the walking and the restaurants and the people… I really, really like this city. What is there? Eight million people in the city? And you can just walk down the street and run into people that you know. That always amazes me."