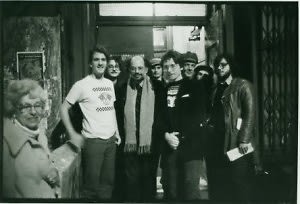 It might not have the cachet of Andy Warhol's Upper East Side townhouse, but the real estate listing for Beat poet Allen Ginsberg's former apartment does note the residence's literary history, even if it doesn't inflate the relatively modest price tag.

The East Village apartment where Ginsberg hosted some of the best minds of his generation, destroyed or otherwise, is on the market. Despite the pedigree and prime location on East 12th Street (and one can only imagine how Ginsberg would react to anything in the East Village being "prime"), the asking price is more or less in line with similar neighborhood offerings.

You'd have to live in Ginsberg's former abode, at that rent, for 833 years to match the $18 million investment required of wealthier bibliophiles to buy Truman Capote's $18 million Brooklyn Heights townhouse. Granted, Capote's residence has 11 fireplaces, while the Ginsberg pad is a one-bedroom fourth floor walk-up.

But when you consider that J.D. Salinger's porcelain thrown is being auctioned off for $1 million, it's a pretty sweet deal. At least Ginsberg's commode has a view of an old tenement courtyard. (See more pictures at EVGrieve.)

And who knows? With Howl, a big screen Ginsberg biopic starring gleefully schizoid James Franco, due out later next month, the gut-renovated apartment's value could see some appreciation. Then again, Ginsberg might not have appreciated any further destruction of the building's bohemian past.