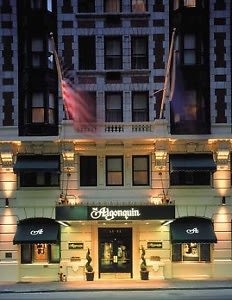 The Algonquin, the landmark hotel and famed literary hangout at 59 West 44th Street, is about to look a bit more like I-95. Marriott is taking over, as part of the chain's Marriott Autograph Collection. What would Dorothy Parker say?

Long a refuge for literary and artistic types, the hotel might be best known for the Algonquin Round Table, below, a group of writers and actors who met in its restaurant for mostly liquid lunches every day from 1919 to 1929. Some choice quotes from charter member Parker include:

"I'd rather have a bottle in front of me, than a frontal lobotomy."

"If you want to know what God thinks of money, just look at the people he gave it to."

"I like to have a martini, Two at the very most. After three I'm under the table, after four I'm under my host."

I can just imagine that kind of wit hovering above a Marriott mini-fridge, can't you? 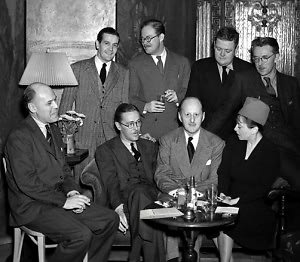 The Algonquin isn't the only midtown grand dame to recently undergo a conversion. The Plaza turned 152 of its rooms to private residences. Vacancies and reports of shoddy construction plagued the transformation leading up to its unveiling in 2008, thanks in part to the Great Recession. But at least there's now a gleaming basement food court to show for it. And in 2006 the Dubai-based Jumeira hotel group put its stamp on Central Park South's Essex House. While that transfer went relatively smoothly, the Essex House did lose its acclaimed Alain Ducasse restaurant the following year.

Midtown's old guard is sliding during a boutique boom downtown. New York's Jonathan Van Meter recently wrote about the hotel-nightlife complex that has suddenly made the Manhattan party scene look disconcertingly like LA's. The repartee at Le Bain and Gemma no doubt falls short of the Round Table's, but it seems that these days, drinkers avoid midtown for fear of it being too square.