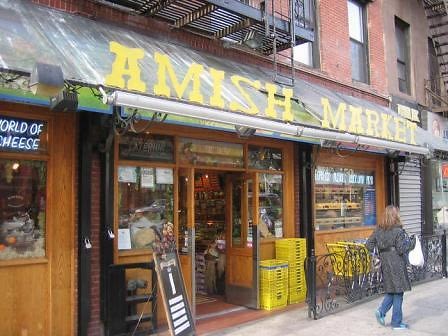 This morning, we read that the gourmet grocery chain The Amish Market is planning on opening at least 13 more locations in the metropolitan area (bringing total to over 30).  What is it with people and their boutique, gourmet groceries in this town???!  While we do like this place actually better than Whole Foods, Trader Joes, East of Eden, AND Zabars, we are just hoping that an Associated will open by us soon.  Or what about a Hy-Vee or a Safeway? (anyone?)  I mean we like olive bars and fresh baked bread and whole grains as much as the next guy, but sometimes we just want to go get in on a special on frito-lays is that okay?...Is there anything wrong with wanting a Totinos Party Pizza once in awhile?  We think not.  Now that that is out of our systems, on to the Amish.  Last night we finally went to eat at the new spot on W. 10th, The Kingswood, which we were under the assumption was opened by Aussies, not Amish. 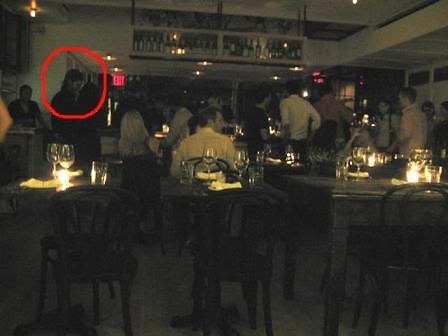 The guy circled is one of the founders of both Ruby's and The Kingswood (Lincoln).  Not pictured (unfortunately) is Joey.  Joey is the guy that greets and seats you at The Kingswood.  We also found out that he is the designer of the space.  It is a shame that we didn't get a photo of the guy, but just imagine the standard Amish man (thick beard and tall hat).  Ah yes, that is Joey, and we love him for it.  We also love the open windows in the back and raised wooden enclave you can look up in the back of the space, as well as the little red butterflies he scattered across the ceiling (can see in below picture).  Overall the vibe here was good last night.  Music was some of the best we've heard at a sit down restuarant in the city (though that was to be expected, Ruby's is always on tune), the crowd was very nice, and  the peach salad was just as good as everyone said.  A tip we would give would be to turn down the lights a little in the back corner, (though they dimmed the whole place around midnight, we felt like we were under a flourescent bulb throughout our entire dinner).  Also, the chocolate cake we had for dessert was a bit dry.  Other than that, loved the place's simplicity, a trait that both the Australian and the Amish can agree on. 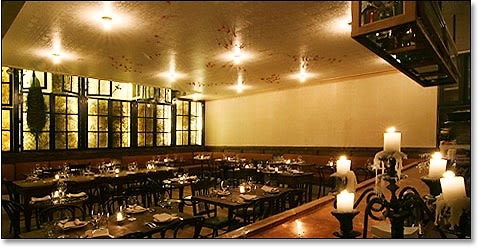