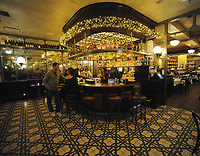 Bloomberg News certainly has no absolute authority in the culinary realm, but a recent review, with some serious below-the-belt jabs, requires our further examination. What's really wrong with Lavo's meatballs?

Ryan Sutton's review comes with a partiuclar breed of malice that rears its head from the get-go of his 1/2 star rating review:

"Lavo, a Midtown Manhattan nightclub that calls itself a restaurant, serves spaghetti with Kobe beef meatballs. It costs $34."

The critic takes issue with what he views as a disconnect between the price and the quality of the food, charging the clientele as spoiled dilettants:

"If for nothing else, credit Lavo with zeroing in on a segment of the city's big spenders who couldn't care less about all the local, seasonal, organic spots crafting dishes from micro-seasonal weeds and exotic organ meats. Just give 'em the darned meatballs."

We're not so sure we want to eat the "exotic organ meats" (we're just not going to go  there), but find the reviewer's fascination with organic and locavore supremacy interesting.

He can't rid himself of the specter of the social networking numbers--10,291 people "like" Lavo on Facebook, whereas Craft, a chain of greenmarket places, only has  818 Facebook fans. This, Ryan Sutton, should not be a conundrum; it's called marketing. The Strategic Group has been a fixture in New York nightlife for some time, and so as disappointing as it may be that his chosen joint is not as popular on social networks, it seems a silly point to address.

He then steps in with the crux of his article: astonishment at the profits Lavo and its sister restaurants can turn.

The vitriol he directs at the financial success Lavo and its sister restaurants face derives from the disgust he feels from the food. He goes down swinging:

"Good Vibrations? I could only score a midnight reservation last Thursday at New York's Lavo. So it seems this 180-seat arena will do just as fine, even as it sells $31 shrimp scampi that taste fresh from the freezer, and veal parmesan with all the depth of flavor of a Hungry Man microwave meal."

Yes, he went there. Sutton also takes issue with the over-crowded state of the club.

"How packed is it? On one visit, a woman briefly laid her pocketbook on our oysters at a lounge table. Our waitress ordered a man to remove his jacket from our buttery lobster arrabiata. Before  we left, our table was a stand for someone's half-finished drink."