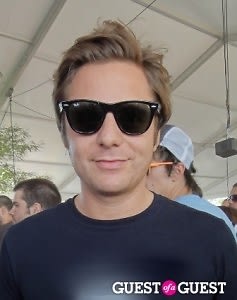 The Windsor, a new high-end sports bar and resto in the West Village, opened a few weeks back to the plaudits of an expat crowd with Anglophilic leanings. Chris Jonns, the joint's owner, moved to New York from London six years ago thinking he would have a career on Wall Street. That was until the restaurant business lured him in.

Since its opening a few weeks ago, The Windsor has drawn a notable crowd, from Jason Stratham and his girlfriend, Rosie Huntington-Whiteley, to Jessica Stam.

Part of the appeal comes from the sophisticated English style of the interior--with plush burgundy leather booths and gray pinstripe fabric on the walls. The environment has the staid grandiosity of a parlor mixed with the down-homes coziness of a pub.

But at the head of this creation stands an ostensibly improbable ring leader: Jonns, who continues to work as a broker Wall Street while pursuing his passion for comestibles and libations. He was an investor in Norwood and part of a consortium that funded Marc Forgione's eponymous restaurant in Tribeca. He was also involved with The Lion and The Charles. This week Jonns answered our questions by email.

GofG: Other places in New York like Salt&Battery have British core; how does The Windsor differentiate itself from other English pub spots?

CJ: Well, we’re not an English pub per se. Our food is of much higher quality than most pubs I've been to thanks to our dynamite chef, Kristine Mana-ay. What we’ve tried to do is create an environment that is equally enjoyable for a casual bite to eat whilst also watching sports. There are plenty of places that do both separately, but not many who have been able to accomplish both in a sophisticated way.

GofG: Through marketing, are you trying to reach a demographic beyond those with Anglophilic tendencies and European leanings? What's your strategy?

CJ: My friends and I were fed up not having anywhere decent that I could watch football (soccer), have a good pint of lager, and a full English breakfast. So I decided to open The Windsor. The philosophy was simple – create something fun that we would all enjoy and, in turn, others would enjoy it too – regardless of where they are from or what sport people are into we show as much as we can on our 7 or so screens ranging from UFC fighting to college basketball.

GofG: What is the origin of your love of food and drink of the sort you've created at The Windsor? Any models for this new place back in England? Any childhood memories that have informed your decisions?

CJ: Well, going to the pub is an integral part of an Englishman’s day, so it’s important that the venue satisfies sufficiently. The Windsor's menu is pretty diverse: it’s not about your standard pub-grub. We’ve tried to take everything up a notch. There is something for everyone. This way the WAGS (wives and girlfriends), as we call them back home, are happy to come and watch sport because we play decent tunes, have comfortable seating, and have created a very welcoming atmosphere.

GofG: I know you have Traditional English Breakfast with sausage from Myers of Kenswick (the famous British market of the West Village). Is there an underground British cabal in New York that we should know about?

CJ: Not that I am aware of, although knowing the Brits there is probably bare knuckle boxing or dog fights going on somewhere...I just wasn’t invited , yet!

GofG: Are you for or against Kate Middleton?

CJ: Having borrowed the family’s name for our restaurant, I suppose we have to be for! I think it’s great a normal person can get a shot at the title.

GofG: Describe your time on Wall Street for me, and what skills do you posses that allow you to thrive in the restaurant business.?

CJ: I actually still work on Wall Street; that’s my day job. I just happen to be very talented at eating, drinking and watching sport.