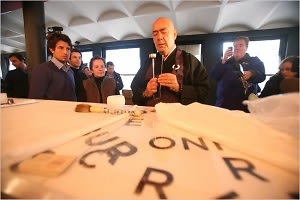 It sounded like nothing more than a fairy tale or a joke: four siblings start a restaurant and receive the blessings of a rabbi, a priest and a Buddhist monk. But it actually happened yesterday, while the winter’s first snowflakes forebodingly fell over Chelsea. After all, it had to be done, because the corner of 10th Avenue and 23rd Street is cursed.

“I am not superstitious myself, but it is good to be on the safe side,” said Elisabeth Dufeu, 33, the lone sister in the entrepreneurial quartet, when she explained why her family's franchise of the upscale New York Burger Company had asked for religious help.

In a recession, entrepreneurs have to go the extra mile to create hype for their business. But even if the instantly likable siblings welcomed a large crowd of reporters to witness the holy happening for buzz-generating purposes, there was a sincere sense that the incantations and rite might matter.

The location was, after all, placed number seven on Eater.com’s Top Ten list of "New York’s Cursed Restaurant Spaces” in September. In an area that is booming with glittering galleries and well-off residents, the corner on 470 West 23rd Street has seen four restaurants fail in a decade.

“We are trying to get rid of the bad spirits and bring on a good atmosphere for the next 25 years,” said Brice Moldovan, 29, the brother of Elisabeth Dufeu.

The quartet also includes Petrous Moldovan (Brice’s twin and younger brother by one minute) and the older brother Jonathan Moldovan. Brice, Elisabeth, and Petrous are franchise partners and respectively maître d', manager and chef, while Jonathan helps out behind the scenes. Their parents had a hotel restaurant in Auvergne, France, but they have worked in New York’s dynamic dining scene for many years.

Brice explained that his siblings and he were raised Catholic, but the crew had wanted to call in other religions as well.

“We’re open to anything, and we need to get as much help," he said. "Good vibes and good spirits from everything, everywhere and everybody,” he said.

Then the blessings began.

“Let us pray that God will bring the restaurant to a successful completion and that his protection will keep those who work here safe from injury,” intoned father Ed Sombilon from New Jersey, a Catholic priest of Filipino decent, as he gave the morning’s first blessing. Cameras followed him closely while he sprayed counter-tops and walls with holy water.

Father Ed was followed by the Buddhist priest Robert Chodo Campbell from the Village Zendo, who chanted his blessings with a deep, booming voice and rang a little bell. Last to go was Rabbi Dennis Tobin from the Bronx, who delivered the most grandiose speech of the day and asked for “luck, mazel and happiness.” He then hang up a mezuzah on the door-frame for good luck, sprayed the location with salt for “sustenance,” and hid a handful of pennies in places where they wouldn’t be found to ensure the restaurant's continued prosperity. 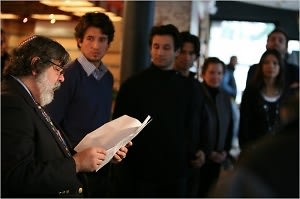 While all three spiritual leaders said they had never blessed a burger joint before, it is not uncommon to seek divine help with housing or business. In real estate a buried-upside down statue of St. Joseph is said to help the speed of a sale, and Father Ed had taken part in a number of restaurant blessings. But not for hamburgers.

For Campbell, the blessing of a burger joint was unusual, because “Buddhists are generally not meat eaters.”

Campbell said he felt uneasy about the fact that animals were killed in the process of running the restaurant. If it wasn’t for the New York Burger Company’s strict adherence to ethical standards, he probably wouldn’t have performed the blessing, he said. He certainly wouldn’t have done it “for a large burger chain,” he said diplomatically.

According to Madeline Poley, the owner of the New York Burger Co. restaurants that started in 2004, her business is the first in New York State to receive approval from Certified Humane, a national non-profit that set standards for the treatment of farm animals.

But even though Petrous Moldovan said he always cooked “13 portions” of every new and special dish, the siblings knew that it took a lot more than rituals to attain success.

“First you have to come up with a good, quality product,” said Elisabeth Dufeu, “and second you will have to have some kind of system,” so you can be consistent in your quality. “You’ve gotta fight for it every day,” she said.

Father Ed was certain that the blessings would add to the success of the place. “People will come here with an idea that it has been blessed and say, ‘I will go there because there is something good in there’” he said.

But some matters are outside of divine intervention.

“Of course, hamburgers might not be too good for them if they eat a lot,” he added with a laugh.