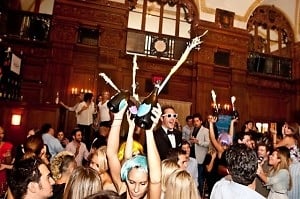 As we've reported, the Brothers Koch (Derek and Daniel) are hosting their boozy brunches this fall in the cloistered stuffiness of the Plaza's Oak Room—something of a digression from their usual trendy bobo venues like last year's Merkato 55. But has the usual hipness of these bacchanal affairs lost cachet by being located in a place better suited to AARP-subscribers? Behold the brunch wars!

We wonder if other dueling brunches gain headway over the bros’ bashes? Tomorrow marks this season’s third Day and Night brunch, where we hope answers (and justice!) will be served.

The low-down for tomorrow: Randy Scott—producer, composer, keyboardist, and saxophonist –will host the brunch that features music by ClavDivs. The invitation features a stately sepia-tone background that depicts champagne bubbles filling the façade of the Plaza: 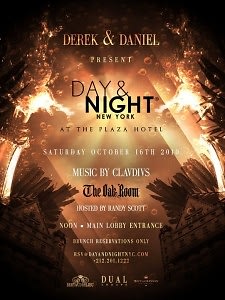 The image itself implies a primmer ambiance to the event than we’ve seen in the past. Hob-nobbers will wash down food with Moet and Chandon, but can this sterile ostentation really compete with Bagatelle’s Champagne Superman? 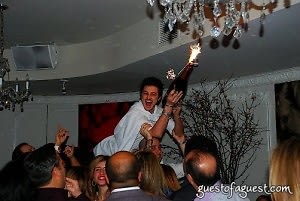 Aymeric Clemente, the gregarious NYC-based Froggie (and forever maître d' of Le Bilboquet) who runs Bagatelle, has the quick-draw advantage of having the European flare and a location above bumpin’ club Rendezvous and nearby Kiss and Fly.

The Brothers Koch lose ammunition this year with no Plaza after-party equivalent to Merkato 55’s downstairs Bijoux. Alas! Maybe High Tea will have to do? Or maybe they'll opt to re-open Jour et Nuit.

Then, of course, there’s bantam contender Felix, the hip Soho French bistro, which has its fair share of saturnalia to go with your moules frites and steak tartar. Or even, new comer, Via de Mille and their Soho dance attacks: 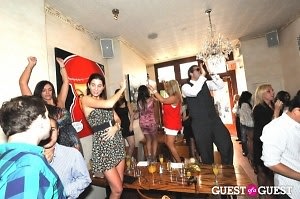 Next week, we will feature pictures of the hot brunches and decide whether the Kochs-perennial brunch heavyweights-can hold water in the staid, tightened-ascot environment of the Plaza.

[Merkato 55 and Bagatelle Bistro, the Battle of the Recession-Proof Brunches]