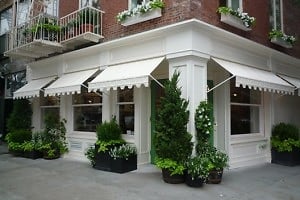 Peels, the new diner-inspired restaurant from Freemans maestro Taavo Somer, unveiled its facade yesterday. The place looks swell, but the most interesting thing about the shiny exterior on Bowery (near 2nd) is how little it sticks out on the once-derelict boulevard.

Fork in the Road's Rebecca Marx writes that the Peels reveal "conveniently offers what is perhaps the most succinct illustration of the Bowery's gentrification to date."

Does Peels complete the Bowery's transformation from squalor to polo collar? If so, will commentary on future Bowery developments omit (sometimes skeptical, sometimes grumbling) references to its rapid evolution?

A time line of Bowery-related articles over the past four years suggests it might be time to accept the street's new reality without dwelling on its very recent past, though criticism is always welcome:

2006: The Avalon apartment complex moves into a former squat at the northeastern corner of Bowery and Houston, somehow convinces New Yorkers to pay dearly for the pleasure of living in one of the city's most charmless and ridiculously named buildings.

March 2007: Whole Foods opens a 70,000 square foot monstrosity on Houston between Bowery and Christie, brings Kombucha to skid row. Damon Tabor keeps tabs on the area's evolution in the Times:

"The dive bars, pawnshops and flophouses for the misanthropic, misbegotten and mostly down-and-out have disappeared...CBGB closed in October, Whole Foods opened in March...The Bowery's gritty glory days may well be over, pushed out by surging rents and the ever-rising tide of gentrification."

"Gemma is on the ground level of the new Bowery Hotel, which has put the words Bowery and fashionable closer together than they ever seemed destined to be." 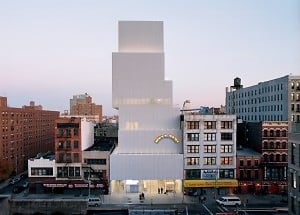 "The...building dwarfs the neighboring low-rise brick buildings...There is a methadone clinic nearby, and a handful of homeless shelters are left. But several developers insist that is a good thing. They say the neighborhood's 'rough edges' attract the artists, designers and celebrities who they hope will frequent the new hotels and boutiques.'Neighborhoods evolve,' said Matt Moss, the developer of a 22-story hotel that is going up just south of Astor Place. 'But I wouldn't want the Bowery to change completely. That's what gives it its character.'" 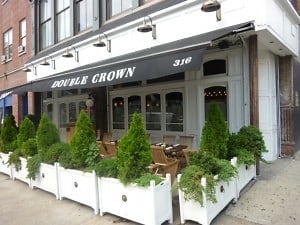 "But on balance this is a kitchen cleverer and more deft than it probably needs to be, given the way the restaurant's trendy (it's true) Bowery location and the AvroKO imprimatur beckon the pretty types."

June 2009: Quintessential uptown chef Daniel Boulud slums it--or does he?--on Bowery with DBGB, a beer and sausage joint whose name pays homage to its location's punk past while its patrons, according to Adam Platt, trample over it:

"'These people are definitely not from the neighborhood,' one of the weary old fressers at my table observed...The neighborhood in question used to be called skid row, of course, but those days are long gone."

January 2010: In a rare instance of upscale backing away, celebrity-ridden sushi restaurant Koi jettisons plans for a new location on Bowery. In an old Salvation Army building.

March 2010: Keith McNally, the restaurateur with a history of neighborhood pioneering, opens Pulino's on Bowery and Houston. The staff claims the corner is sketchy. But, for once, McNally isn't putting a neighborhood on the map so much as contributing to its overexposure.

September 2010: The major league reviews of Peel's won't be in for a few months. But the people, or at least EVGrieve commenters, have spoken: