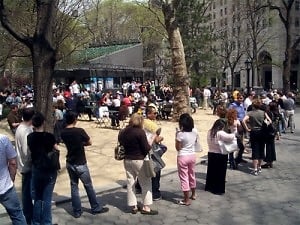 Meyer is to city parks what Keith McNally was to emerging neighborhoods before every 'hood in the city had emerged. His Union Square Cafe put the park's greenmarket on the map in 1985, years before green became all the rage. He opened Gramercy Tavern a few blocks north in 1994; the two have duked it out for title of most popular restaurant in NYC ever since. More recently came Shack Shack (and a slew of locations beyond Madison Square Park) and Maialino, just off Gramercy Park*.

Now, Fork in the Road has the news that Meyer will bring Shake Shack and Blue Smoke (his BBQ joint) satellites to the southern tip of the island next year. An as-yet-unnamed fine-dining restaurant will join them. Even the man with the Midas touch has his work cut out for him with this plan. Despite its crescent shape, Battery Park is the squarest of all the public spaces Meyer has redefined.

The Financial District has made some strides lately, but is still dismissed by many as corporate by day and eerily deserted by night. Then again, it was that sense of needing new businesses and foot traffic that made the plans possible, as opposed to the proposed Shake Shack in overrun Nolita, which neighbors shot down.

If Shake Shack can't shake up the neighborhood, draw some new blood, and clog some fresh arteries, the area might have to throw in the towel for good.