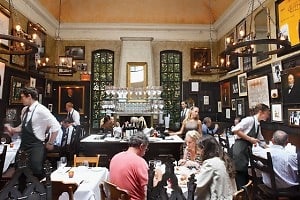 The hoi polloi will always want to eat among the rich and famous. Rubbernecking distracts from the food at New York's celebrity canteens. But diners once had a reason to refocus on their plates. This week's reviews of The Lion--one scathing, one mediocre--suggest that's no longer true.

Sam Sifton of the Times and Adam Platt of New York magazine both filed (and piled) on The Lion this week. Reviewing the reviews of celeb restaurants from those publications reveals the genre's decline. Here's how star-studded eateries became Zero Star duds with the critics:

Da Silvano (1975-   ): Greenwich Village's perennial celebrity favorite--they prefer the sidewalk tables, for discretion and all--got Two Stars from the Times' Marian Burros in 1984 and Ruth Reichl in 1998. Frank Bruni downgraded that to One Star in 2006, but made up for it by opening the review with endorsements from Madonna, Tom Hanks and Danny DeVito. The grandfather of starry restaurants is a New York critic's pick. 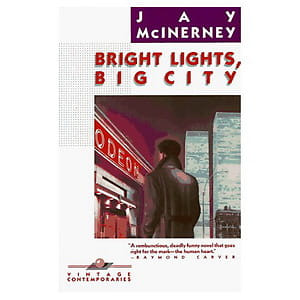 Odeon (1980-   ): The Odeon made not only Keith McNally, but the formerly overlooked Tribeca.  It was Immortalized on the cover of Jay McInerney's Bright Lights Big City. Hal Rubenstein lauded the bistro in New York in 1998 and it's still a critic's pick after 30 years. The Times archives turned up more features than reviews, although we know Bruni won't be eating there anytime soon.

Indochine (1984-    ): This Lafayette Street haunt jumped on the fusion train early, and also fused the fusty uptown and artsy downtown celeb worlds. Awarded Two Stars by Bryan Miller in the Times upon opening (he cited the "gastronomic Lewis and Clarks who have already discovered it"), not even a subsequent Bruni pan could put a damper on its recent 25th birthday celebration.

Nobu (1994-   ):The Tribeca outpost was not the first nor the last in Nobu Matsuhisa's glam, global sushi empire. But it drew the big names (Howard Stern never shut up about it), and still holds a Three Star rating from the Times. Nobu also shows staying power over at New York, where Gael Greene named it one of the 40 most important restaurants in the city in 2008.

Balthazar (1997-   ): Before boldface New Yorkers ceded lunch and dinner to tourists, McNally's SoHo brasserie was the place to be. Reichl gave it Two Stars in its first Times review and it made Platt's list of best restaurants in the city in 2006. Don't let the New Media dorks who still mob Balthazar at breakfast deter a visit. 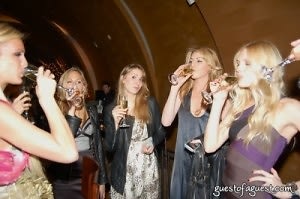 Butter (2002-    ): Richie Akiva's Lafayette Street venture seriously blurred the line between restaurant and nightclub. The Times' Eric Asimov rewarded the effort with One Star. Platt filed a more enthusiastic piece, praising a place "so ambitious it just might work." The champagne and stiletto set (pictured right) was too busy flooding Butter for its signature Monday night bashes to care.

Waverly Inn (2006-   ) Vanity Fair editor Graydon Carter made the jump to restaurateur with his precious Village quasi-speakeasy. Opening pre-recession, Waverly got away with a $55 mac and cheese and won a single star from Bruni and Platt, who both conceded the food was better than it needed or had any right to be, given the movie and media royalty huddled inside. The heat's faded a bit, but not enough to warrant a public phone number.

Monkey Bar (2009-   ): Carter's midtown Waverly Inn facsimile never quite matched the Inn's buzz, despite Vanity Fair pimping it out every month in its party pages. Bruni and Platt each gave a star, although Platt griped that "A-list connections can't cover for D-grade cooking." Eater recently asked if Monkey Bar was "the power dining spot it was once destined to be" in light of a downsized lunch menu. 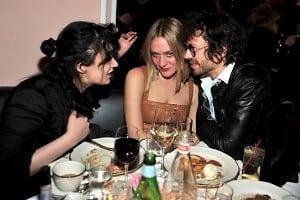 Kenmare (2010-   ): From Beatrice Inn's Paul Sevigny, Kenmare is another restaurant-club hybrid that failed to woo critics (zilch stars from Sam Sifton in the Times, one from Platt) despite a real deal chef (Joey Campanaro). Also confused were the couture hipsters who crammed the basement lounge and gave just slightly less mixed reviews.

The Lion (2010-    ): A side-by-side comparison of this week's reviews from Sifton (One Star) and Platt (No Stars) reveal almost comically divergent takes on Lion's food. Sifton describes a "luscious hamburger [chef John DeLucie] pairs with pork belly, provolone, smoked cheddar and caramelized onions." Platt derides a "burger garnished, disastrously, with a flabby chunk of fried pork belly." But they agree on star wattage too dim to blind you from the measly grub. Sifton notes that "Jet Blue customers" join the "private plane" crowd and calls out the "Delta Taus" and "women skating on the thin ice of fashion" at the bar. Platt cringes at "a rabble of assorted frumps and arrivistes." So, average Joes can get into The Lion. But why on earth would they want to?

Given the fleetingness of Hollywood careers and New Yorkers' culinary whims, the most amazing thing about these star-clogged restaurants is their staying power. But if The Lion and Kenmare want to display Da Silvano- or Odeon-like legs, they'll need either a celebrity stampede or overhaul in the kitchen. Or, ideally, both.

[Photo 1 via Hannah Whitaker/NYM, 4, via Purple]