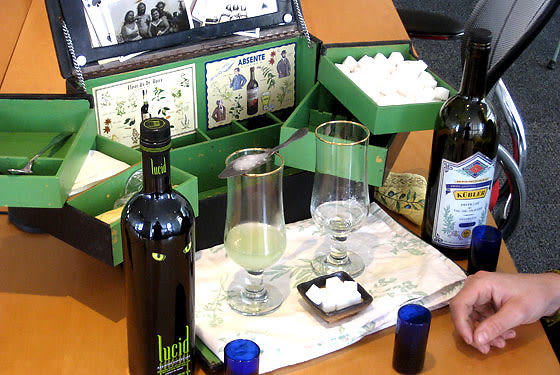 "la Fée Verte" translates to "The Green Fairy" and it is a common name to refer to the wider known "Absinthe". Ah absinthe. The stuff that every American college aged student is dying to try on their visits to European cities such as Amsterdam and Belgium. The drink, derived from the grand wormwood plant has always carried a sort of romantic appeal. It was of course, the substance that so many have claimed to cause "crazy-like behaviors". Vincent van Gogh and Pablo Picasso both enjoyed the green alcohol, as well as Oscar Wilde. Ernest Hemingway went so far as to coin the "death in the afternoon" cocktail, a concoction he came up with himself using the stuff.

Well, absinthe was finally approved to be sold in the states and arrived in New York in June. Lucid, the brand by Vividian Spirits in Manhasset, NY was the first one in the market and boy do we wish we owned a piece of that company. Now, Lucid is available only in NY, NJ, and Illinois, and at fine retailers like Park Avenue Liquor, and restaurants such as Waverly Inn, STK, Kobe Club, Stone Rose, Grammercy Tavern, and Pastis. For a full listing of places serving Lucid go here (we still aren't sure how TenJune pulled off being on the distribution list). Well today, NYMag is not only informing us of the second (and apparently much tastier) brand of absinthe to hit the US market, they hired their own green fairy to do a detailed comparison of the two. (God, we love the work you guys do over there!) After 5 years of haggling with the U.S. FDA, Yves Kubler got the go ahead to bring his own, untouched family produced recipe from 1875 over for us to try. Let the fun begin. Just remember, it will be a lot more fun if you drink it as you are supposed to: distilled over sugar with water as shown above. That shit is 124-proof which means its alcohol content is more than 50% greater than that of vodka, rum, and most whiskeys....hence our above concern with distributing to the TenJune-ers mentioned above. Also, let's all PLEASE, PLEASE work together to keep Britney and Lohan away from this shit, we don't want it banned for another 100 years.