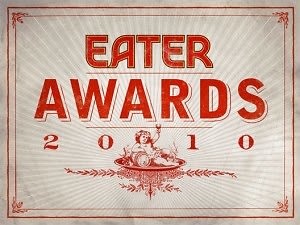 This week, Eater.com announced the first annual "Eater" Awards, and invited readers to "have at it" and nominate some winners. Well, don't mind if we do!-

2009 made comfort food like fried chicken and pork belly big again, and 2010 seems to have continued that trend with simple single ingredients, a la Meatball Shop and Baoguette. Decadent restaurants like Tabla are giving way to more down-market options, like how Craftsteak has been replaced by Collichio & Sons.

We are by no means experts on food (we appreciate Cool Ranch Doritos and Pork Belly with equal relish), but with the consultation of some of our foodie friends, we came up with some predictions and nominations.

Restaurant Of The Year, to the restaurant, old or new, which had the single greatest impact on the city's dining scene in 2010.

Oh, if only Ai Fiori had opened in time to make this list!

It's hard to pick a single restaurant this year, since so many of the successful ones were collectives.

Begrudgingly, we may have to give it to Eataly, which, yes, is a collection of restaurants, but in terms of having the greatest impact on the city's dining scene, would probably win out. Mario Batali basically made like, a food mall, where two months later there's still a 90 minute wait for pizza.

So Hot Right Now, given to a restaurant that opened in 2010 that best captured the city's dining buzz. 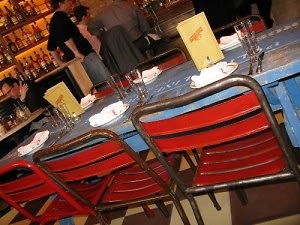 First of all, the title of this award makes me cringe.

But anyway, the "So Hot Right Now" award, in our opinion, should go to Pulino's. For us, the only competition in this category would be Kenmare, which recently won a Paper Magazine Nightlife Award for "Best Restaurant With A Nightlife Scene".

Kenmare has certainly gotten a lot of buzz and is definitely a clear winner when it comes to partying, but Pulino's wins by a landslide. People were buzzing before the opening, tweeting the first breakfast, live-blogging the first lunch, cursing it for killing other neighborhood restaurants, and vying for Foursquare Mayorship at it. Call it overrated, but there's no denying you can't walk by Pulino's without seeing a line out the door, and at least two celebrities. Also, what other pizza parlor do you know of with a bouncer?

Chef of the Year, to the city's chef of the year, as you define it

Gonna go ahead and give this one to Mark Ladner, for his 4 stars in the Times for Del Posto, with extra shoutouts to David Chang (maybe a little 2009?), Tom Colicchio (because of Colicchio & Sons and Riverpark, also because he's arguably our city's top chef), and Michael White.

Grey Goose Shaker Of The Year, awarded to the city's top cocktail creator. 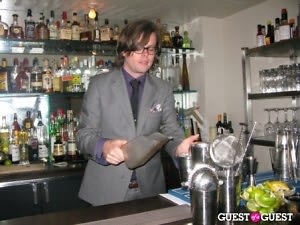 Otherwise, Christina Bini of Il Matto, where the cocktails are split into savory, salty and sweet.