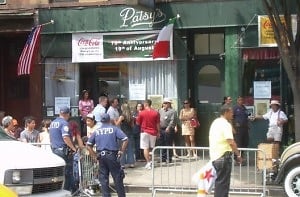 File this under: Another example of stupid things people do for free shit.

Going to the latest, publicity-driven social party where you will be forced to engage in meaningless conversation just so you can walk away with the free gift bag (ahem Nick Leighton), is one thing...spending hours standing in a line to save a couple bucks on a slice of pizza is downright ludicrous.  And yet, look how many actually chose to willingly line up outside of Patsy's in East Harlem for 60cent pies. Patsy's was celebrating its' 75th anniversary and was also handing out 90-cent steaks, 70-cent pasta dishes.  The mayhem became so intense that police were force to end the affair at 7:00, three hours earlier than promised and resluting in a lot of hungry savers-to-be.

It always amazes me the lengths people will go to in NYC to get something (anything) for free or drastically reduced, even though you're saving as little as $2.00 and possibly as much as $10.00, but the best part is after the stress of waiting in line with all those people, how many don't think twice of dropping $8 to $14 for one beer or cocktail? [commenter on eater]

I'm with this guy.