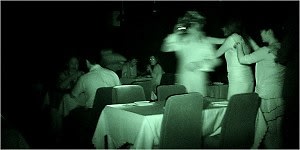 Le Baron isn't the only pretentious Parisian import coming to town. Dans le Noir? (question mark theirs) is a restaurant where diners eat food served by blind waiters in pitch darkness. Its Lower East Side neighbors aren't in the dark about the eatery's shadiness.  -

After abandoning plans for a Gramercy location, Dans Le Noir? sought to take over the old Tonic space at 107 Norfolk Street. As an experimental music venue (and former home of the Bunker party), Tonic could get away with cutting the lights. At last night's Lower East Side Community Board meeting, Dans Le Noir? co-founder Etienne Boisrond allayed skepticism about the same design working in a restaurant where people might want to see what they're shoveling into their gullets:

"Diners eat in the pitch dark and are served by blind people, creating an interesting sensory experience.You become the blind and [the servers] become your eyes."

Whatever you say, mon frere. At least CB3 wasn't deaf to Boisrond's pleas, as board members approved the business. I can see how the concept benefits owners and staff. The utility bill will remain low. Only customers with the most sophisticated palettes will spot the substitution of Hellmann's for rémoulade. And what kind of jerk is gonna stiff a blind waiter on the tip?

It's unclear what customers have to gain from the arrangement, although a literal blind date at least saves participants from the harsh glare of conventional restaurant lighting. And Dans le Noir? might make for some of the most entertaining restaurant reviews since Ninja made Frank Bruni want to go all harakiri mid-rice cake. Especially since no one will be able to spot and woo a critic here, no matter how shoddy his disguise.