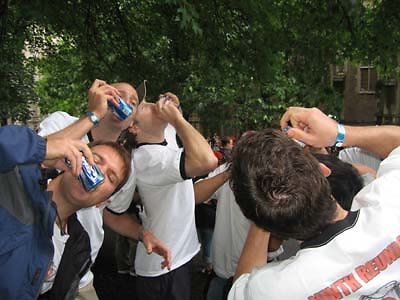 We always get a kick out of Ivy Leaguers who try to drink with the best of 'em. Normally this purusit is reserved for the tubby frat boyzs of Alfalfa State, but the guys and gals of Princeton University certainly give them a run for their money. This upcoming weekend (June 1st-3rd) upwards of 20,000 alumni and guests will descend upon the college town of Princeton NJ and consume over 350 kegs of beer, the single largest private beer order in the country! It is no wonder why this is the most well-attended college reunion in the world.

Some other curious facts about Princeton (from Wikipedia):

Class Jackets (Beer Jackets) - Each senior class designs and distributes a beer jacket, which class members wear until their twenty-fifth reunion, at which point they receive class blazers. (At major reunions (multiples of five), each class receives a new themed P-rade costume.) Beer jackets are so named because they were originally worn to protect the wearers' clothing from beer. However, modern incarnations are also designed with voluminous inner pockets to conceal and carry beer cans.

Newman's Day - Students attempt to drink 24 beers in the 24 hours of April 24. According to the New York Times, "the day got its name from an apocryphal quote attributed to Mr. Newman: '24 beers in a case, 24 hours in a day. Coincidence? I think not.'"

Nude Olympics - annual (nude and partially nude) frolic in Holder Courtyard during the first snow of the winter. Started in the early 1970s, the Nude Olympics went co-ed in 1979 and gained much notoriety with the American press.

Prospect 11 - referring to the act of drinking a beer at all eleven eating clubs on Prospect Street in one night. With the recent closure of Campus Club, this has become impossible; however, the historical Cannon Club is due to reopen in Spring 2008, and the Prospect 11 will return.

And finally, this interactive Google map shows the resulting outcome of the marriage between dorksters and alcohol. Some of the best parties we've been to were thrown by geeks....this weekend will obviously be no exception.