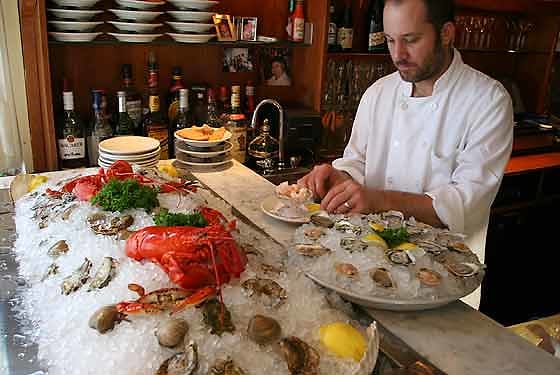 The past couple of weeks have been a whine-fest of New York writers lamenting the end to nightlife in our city.  Well, we've been  over the club scene for awhile now. And tomorrow, we will unleash upon the world wide web, an extensively researched list of the under radar places to go after dark.  We have drawn upon a wealth of sources the last two days and are excited to culminate our findings into one big report for you.    Before this happens, I would like to take the time to get one of my favorite places out of the way, a place whose greatness is no secret, and who will be celebrating it's sweet sixteen this year: Blue Ribbon.

In order to do the place it's justice, and provide you with the best of the best insider information, I had to contact MR BLUE RIBBON himself, a fan that has spent over a decade calling the little place on Sullivan Street his second home.

Everything You Need To Know About Blue Ribbon That You Won't Find On A Food Blog:

Blue Ribbon always draws a most eclectic crowd. From local foodies, to off-shift chefs, to hip hop impresarios...you need to play along.  Bring a crowd of 5 or more for a reservation, and make it some interesting folks...the place is too special for average dining room chit chatter and bores.

If you are under 5 you will need to wait at the bar. And so, a whole new set of tips: always ask if they have ruby red shrimp at the raw bar, they only have them once in a while but they're spectacular. Talk to James. He likes skiing in Colorado and baseball.

A little known secret: the full menu is available at the table by the door, which is rarely occupied and not the most comfortable of seats.  However, it's great for a last minute snack for two if you're on the run.

Bar seats are a hot commodity as are the first come, first serve tables.  It can't hurt to get to know the incredibly loyal and dedicated grew of servers.  Rumor has it they love baseball and hockey.

Make sure you try the alonso sauce, named for their veteran oyster shucker and raw bar master Alonso (who, sadly passed away a few years ago), its a tangy alternative to the usual oyster accouterments of mignonette and cocktail sauce.

If you're with company, finish with the chocolate bruno- flourless chocolate cake with ice cream. It's orgasmic.

The "Spicy Fish Soup" can be ordered on the "milder" side and is a solid choice every time.

-dozen oysters (6 and 6, west and east coast, depending on what they have) and a smattering of scallops and ruby reds if they've got them

-good conversation at the bar

-and whatever's fresh - leave it up to them to take good care of you!

Also, for a taste of what former raw bar vet Johnny D has to offer, check out Sidecar.