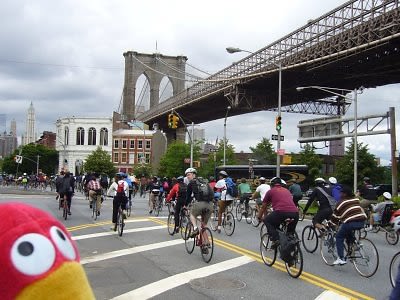 While some were living the high life in the Hamptons, many others were enjoying their New York City sans the socialites. Brooklyn Bridge Park hosted a non-stop birthday extravaganza in honor of the structure from which the green space earned its name. There were movies, lectures, d.j.’s—and, of course, my favorite—an 18 mile bike ride. The not-so-latent hippie in me has trouble maintaining a steely New York exterior in the face of a peaceful gathering consisting of 2,000 New Yorkers who decided that, on their Sunday off, it would be best spent aboard a two-wheeler taking in the finer points of the (cough! superior) borough. Watch this video. See if you don’t get that rush of love.