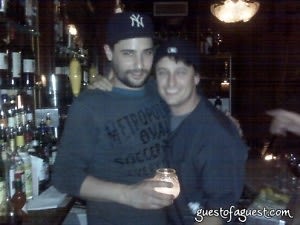 [Eric and Uriah Herr, members of the "Supper Club"]

"Supper" is a word that, to say the least, has finally grown on me.

Supper: "In rural areas of the Upper Midwest supper is an evening meal which is adapted to the daily rhythm of farm life and similar to eating customs in northern Europe where most of the inhabitants originate from. Supper is the last of three to five daily meals: breakfast, (morning lunch), dinner, (afternoon lunch or "coffee") and supper. [Wikipedia]

In my juvenile teenage days I lamented in the fact that my parents would still, at times, refer to our evening meal as "supper", a term that originated from their rural Midwestern upbringings. Once feeling silly and out of place for using this word, as an adult I have come to miss hearing it....a word that conjures up so many memories of Grandma's "Slosh" served on a long table with more wine bottles than water, and at least 15-20 of my cousins fighting over the last "poppyseed kolace", in a small farm house in the middle of nowhere. Ulysses, Nebraska may as well be the end of the world...or the beginning depending on where you're standing. The point is, we ate "Dinner" at lunch time, and "Supper" at dinner time, a resonance of my grandmother's French beginnings?, or perhaps just a farm thing....

Last night I got the chance to eat SUPPER again, in a hip restaurant, in a town that many consider to be the center of the universe.

Supper is a quaint venue in the east village (156 2nd street between Ave A and B), that is as charming as it is popular. I don't know what it's like to eat in the actual resturaunt, as even on a rainy Tuesday night, it has over an hour wait, but the bar attached to the place was more than satisfying. This was mainly in part because of the chicken special, the bottle of red vino, and the bartender who made us feel as much at home as I once did during the Suppers of my youth.

Eric Herr provided us with quite the evening of anecdotal knowledge and tidbits from things regarding that little venue on Chrystie Street, to where the best dive bars are in the city, to what it's like living above Happy Endings. A true born and bred New Yorker, he had his brother and cousin in tow, all wearing matching Yankee baseball caps, even despite their 12-2 loss tonight...they may as well have been guys from my home town discussing football over Miller Lites and hotwings. If you're ever in the mood for a genuine server, as real as they come, you can find him at SUPPER, or, rather Lil Frankies, owned by the same bunch, on Saturday brunches, and Tuesday nights. You might even get lucky and meet his partner in crime, brother Uriah, just don't bring your Mets gear with you.