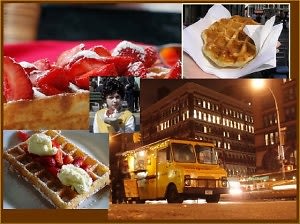 Because we are an equal-opportunity site, and because we know some of you frankly don't give a damn about sat fats or simple carbs, we would like to broadcast the second coming of Manhattan's beloved Wafels & Dinges truck. Wafel & Dinges is a mustard-colored manifestation of Thomas DeGeest's love of his homeland, Belgium, and its waffles. Starting May 23rd, the sprightly yellow vehicle will be parked outside Alex Gordon's (Bourbon St.) new seafood and burger joint, Surf Shack.

After you've finished your lobster (which, at $10 for 1 1/4 lbs, must be one of LI's best deals), and tired of the Blue Hawaii rerun that's playing on the widescreen plasmas, hit up the wafel-man for some crunchy, chewy,syrupy, nutella-y culture. We're partial to the liege cinnamon royal with strawberries, but with four types of wafels and six dinges (toppings), feel free to create your own.