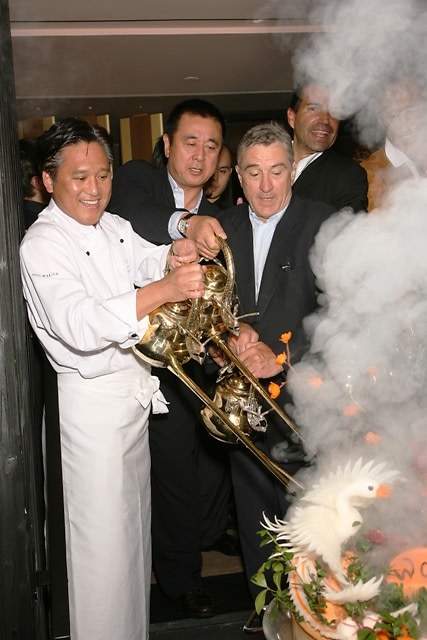 So, Wakiya at Gramercy Park has been open for awhile (hello, remember Wintour's famous party for her new muse was thrown there weeks ago?), but last week was the official opening of Ian Schrager's new joint and his fans naturally obliged by not only coming, but playing along with his theme. Thanks to an insider that was there, we received this classic photo of Robert DeNiro, Nobu Matsuhisa (of Nobu), and Yugi Wakiya pouring tea into a smoking cauldron in a traditional tea ceremony. That IS certaintly NOT something you see everyday. Though Wakiya was Schrager's third choice, with the backing of Nobu, and DeNiro in as part of the funding team, we're certain he is not regretting his West coast pick. Other guests present included Jeremy Pivan, Molly Simms, and LL Cool J (who is of course a much better self-promoter than rapper).