[Wei Under Par] On Monday, Lucas Glover, a relatively unknown golfer, outlasted the field and took home the U.S. Open trophy. Where was Tiger Woods, or Phil Mickelson, you ask? Tiger was the outright favorite to win when the tournament started and Phil was the people's choice. As the world's number one and two golfers, respectively, they both made their run at the title. But how about the New York fans that stuck it through the soggy, rainy and muddy week at Bethpage Black, and cheered on the players until the very end? 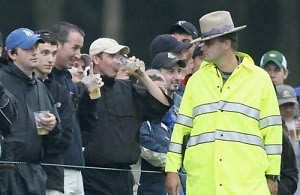 Some argued that the spectators were obnoxious, abrasive and inappropriate. The galleries weren't that bad. Of course there were the beer-guzzling fans that made tacky and less-than-intelligent comments. You know, the standard ones that we hear week in and week out - "Get in the hole," "You da man," "You suck," among others. Look, there are drunk jerks at every tournament. As long as they weren't being completely disrespectful and interrupting shots (Tiger didn't think they were, enough said, God spoke), then I say so be it!

Overall, the crowd was supportive and enthusiastic, which created an absolutely amazing atmosphere - one that was unparalleled to anything I’d ever experienced - especially at a golf tournament. The players didn't seem to mind the vocal galleries either. In fact, I think many have been entertained and encouraged by the crowd’s response. What else could they do? It was pretty amusing. They interacted and did in fact exchange witty banter. God forbid, at a golf tournament? A major championship, no less? I loved it.

While I camped out behind the fourth green on Sunday, I could tell the players were having a good time and getting a kick out of the crowd’s drunken antics. By late afternoon, you can bet that most fans were a dozen beers deep - at least. They started doing the wave - it was a riot! When players drained birdie putts, the crowd roared. And they threw their ball into the grandstand. Fans started chanting, “Throw it back, throw it back!” Were we at a Yankees or Mets game? It sure felt like it and it sure was fun.

The crowd was especially supportive of Phil, whose wife Amy was diagnosed with breast cancer last month. Fans consistently hollered words of encouragement and Phil responded with smiles, waves and his standard thumbs-up. On Monday, as he walked up the 18th hole, people stood up and chanted, "Let's go Phil, Let's go Phil." It was awesome.

Point being, the majority of golf fans and pundits need to loosen up. You know, have a little fun. Let their hair down. Live a little. Don't we want the sport, game, whatever you want to call it, to become more mainstream? It's not an uptight gentleman's sport no more! New Yorkers are leaders, and at Bethpage Black, they showed how it could be done.

So whatever your opinion is on New York fans - don't forget that they're willing rough it out rain or shine. More importantly, they have the uncanny ability to create an electrifying and enjoyable ambiance - even at an event as "bland" as a golf tournament. To those who watched from their couches and shook their heads at the vocal spectators, you know that we were having a great time. And you probably wished you were there. This U.S. Open was rather strange, but it was certainly unforgettable - partly a result of the enthusiastic and boisterous crowd.