[Highly skilled golfers only- Stephanie Wei fits right in] (Catch up on all of Stephanie's US Open Coverage HERE.) As expected, it's raining for the first round of the U.S. Open. Uh oh. Press the panic button. Now. Bethpage Black is already a really long course and really tough. Still, I expect that we'll see some high scores. It's going to be a muddy one, to say the least. Um, I know, I can't believe I'm going to a golf course today - one that's outdoors too. What can I say - I'm such a trooper! It's also the U.S. OPEN!!! I wouldn't miss this for just about anything. 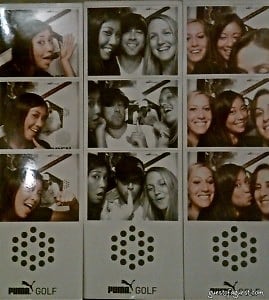 The good news is that I'll be part of the PUMA Brigade - a group of 75 "superfans" that are "storming" the course to cheer on PUMA athlete Geoff Ogilvy. We're going to be wearing PUMA Golf Special Edition shirts that are black and white (the same one that Ogilvy is wearing) along with a military cap. Oh, and of course, PUMA ponchos! Woohoo! I'm also wearing golf shoes.

It's pouring. Wait. Have I mentioned that already?

The best part is that I picked Ogilvy as my favorite to win. That's right - you heard me, I didn't pick Tiger Woods! Yep. I decided to take a gamble. You gotta live a little. So, why did I choose Ogilvy?

He already has two wins under his belt. He's just an all-around solid player. Not to mention, he's a fairly long hitter, which I think I've heard every other minute is an advantage at Bethpage. More importantly, he hits it really high - a must for the many elevated greens - and if the greens firm up, it'll help hold the ball. What else am I forgetting? Oh yeah! He won the 2006 U.S. Open at Winged Foot and finished T9 last year. I think he likes Mike Davis' set-up philosophy. If anyone can hold-off Tiger, it'll be Ogilvy. (PUMA didn't paying me to say this, I swear.) He's just a playa!

In related news, if you want to check out the "Official" Bloggers Picks," go to Dogs That Chase Cars. (That means you should.) One last thing - The pairings for today are pretty darn good. Really, just LOOK. So tune in to ESPN this afternoon - it's going to be amazing and you won't be swept away in the deluge. 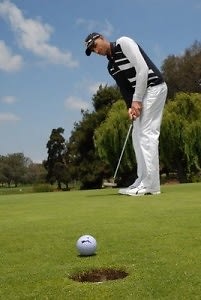