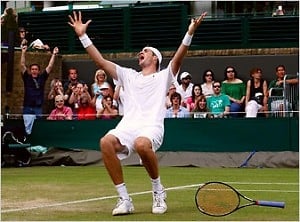 So that John Isner-Nicolas Mahut match won't still be going on once the U.S. Open hits town around Labor Day. The American gigantor just won the fifth set 70-68! And that marathon match reminds me of another nail-biter: the wait for the next hometown tennis hero.

American tennis needs some new blood. The Williams sisters continue to tower near the top of the rankings and claim slam titles. Andy Roddick performs admirably in the shadow of the Roger Federer-Rafael Nadal stranglehold atop the men's game. But none of the country's three biggest tennis stars are spring chickens. And despite hints of greatness and arguably flukey turns in the spotlight from players like Melanie Oudin and, now, John Isner, the future talent pool is shallow if not outright bleak.

So why should New York be the city to produce the player to bring the sport out of its doldrums? 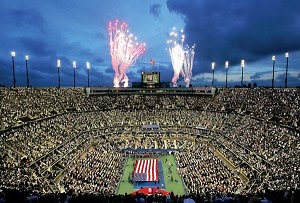 The U.S. Open Needs A Hometown Favorite. A commentator once described the U.S. Open as the hot dog and Budweiser of Grand Slams to Wimbledon's strawberries and cream. Decorum is lacking out in Flushing Meadows as famously rowdy and...vocal New Yorkers cheer on or curse out the athletes. Americans traditionally perform pretty well on their own soil, but a U.S. Open champion from not just America but New York would make the already electric atmosphere as buzzing as the tipsy spectators.

New York players show emotion. Just as the U.S. Open is the most gleefully profane of the grand slams, New York players have a reputation for breaking with the sport's staid tradition and bringing some street grit to the court. OK, John McEnroe is almost single-handedly responsible for this legacy, but it's time for another city kid to revive it. James Blake, wherever he is, should start throwing racquets.

New Yorkers shamelessly lobby for athletes to move here. Everyone from Jill Zarin to Michael Bloomberg has reached out to Lebron James in the hopes he'll join the Knicks. Tennis is an individual sport, so in this instance begging for an already established star to become a big city transplant wouldn't restore a faded franchise's glory. But it's worth a shot. Also, Isner is 6'9", so maybe he could shoot hoops while he's off the court. He couldn't make the Knicks much worse than they currently are.

Anna Wintour could use a homegrown tennis muse: Wintour's Federer fixation is charming and just slightly bizarre. Surely the arbiter of style could spread the love and become a fixture in some stylish local's VIP box seats.

New York is a media capital that can catapult an unknown into superstardom overnight. The unheralded Oudin become a media darling during her improbable run through the quarterfinals at last summer's Open. There's no better place to make a big splash than New York, because let's be honest, we decide what the rest of the country (which apparently exists) talks about. Need another example of this town's, and the Open's, ability to generate conversation? Do Serena Williams' catsuit, or last year's outburst about shoving balls down throats, ring any bells?

In the meantime, I hope Isner treats himself to some of those strawberries before his next match gets underway.