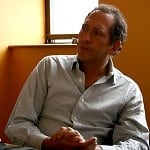 This quote of the day, made by my favorite Uncle Steve Lewis in his Blackbook post on the Paper Magazine nightlife awards in regards to Frank Owen, author of Clubland and notorious Heineken lover.  Frank was apparently desperate enough for press that he decided to threaten to sue Steve over this comment and wound up on in today's Post.  The funniest thing about Frank's silly threat to Steve isn't that Frank is double Steve's size and half his age, it's the awesome debate that is going on live between the two right now over at Blackbook. Click below for Frank's silly threat:  TEAM STEVE!

“Hello, this is Frank Owen, author of Clubland, who Steve Lewis threatened in his blog yesterday. I just want you to know I just filed a complaint with the local police department. You know, I don’t blame him, because he’s not a journalist, and he doesn’t know any better, and he’s an idiot. But I blame you, especially since you put that ‘popping’ [unintelligible] in the headline. Look, I don’t want to see Lewis arrested, he may still be on probation, he’s a convicted felon, right? But if this happens again, right, I will sue you. Do your job, for Christ’s sake!”