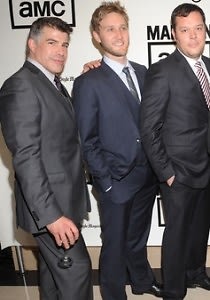 Mad Men has done the impossible and gotten even darker than usual this year. But as bleak as things are in TV land, cast members given the boot before this transitional season are no doubt feeling Draper-like depression in real life. Viewers also feel abandoned by some missing favorites.

Creator Matthew Wiener was wise to trim the drama's fat. Unlike an ensemble series such as Lost, whose sprawling cast was marooned on a timeless island, Mad Men has some very messy history and fanatically detailed period touches that compete with supporting players for second billing. The series feels overstuffed when more than a handful of character arcs complement subject matter like civil rights, feminism, WASP decline, the sexual revolution, three martini lunches, and cartons upon cartons of Lucky Strikes.

aul Kinsey (Michael Gladis): An early model Fauxhemian, the aspiring beatnik--beard, pipe, grass--was a Freedom Rider who was a bit too proud of dating a black girl and living on the wrong side of the tracks in Montclair. Alas, he lacked Ken Cosgrove's literary chops and never forgot it. His Princeton alumnus status suggested affluent roots he'd rather forget.

Ken Cosgrove (Aaron Staton): Combining all-American jock looks and Cheeveresque literary ambitions, Cosgrove was not above wrestling a secretary to the office floor to determine her pantie color, despite being published in The Atlantic. A subtle flirtation between Ken and Sal (OK, this was mostly thanks to Sal), hinted at a future subplot that's been put on hold.-

Sal Romano (Bryan Batt): A talented art director, Sal was the only  Sterling Cooper higher-up whose last name ended in a vowel. He was also a closeted gay man. The wounded, scared look on his wife Kitty's (Sarah Drew) face when she figures him out was one of last season's saddest and most powerful moments. Don also knew Sal's secret and, in one of his relatively empathetic moments, didn't give a fig. Sal gets my vote for character most deserving of a revival.

Affable lug Harry Crane (Rich Sommer) made the jump between firms and provides some much-needed comic relief. Early glimpses of his domestic life and financial insecurity at Sterling Cooper were intriguing. But his character so far lacks the nuances of his ex-colleagues. Then again, he heads the television department. Maybe the fact that Harry is as shallow (and arguably underwritten) as the medium he represents is a deft touch from Wiener.