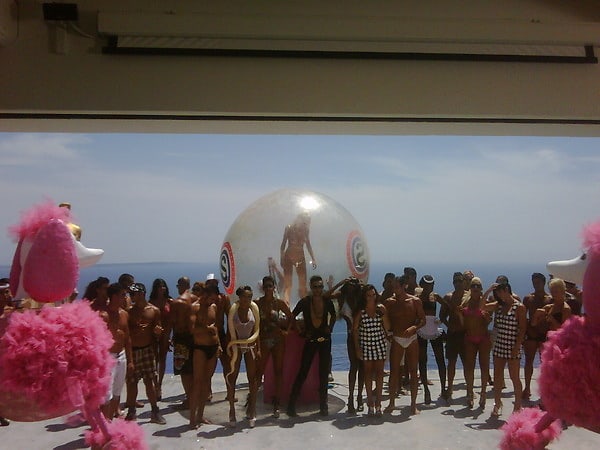 Essential ingredients for a St.Tropez Party: two giant pink poodles, two guys in speedos, a python, a stunning backdrop of the water, and a bikini-clad girl in a giant bubble. Oh, and Paris Hilton. Oh, AND a million dollars. Luckily, JHo Low's got all that!-

It's possible that Taek Jho Low, the mysterious playboy who spends breathtaking amounts of money around the world, has a great personality, and therefore doesn't NEED to pay for Paris Hilton to come hang out with him in St. Tropez. It is possible that he is so hilarious that Lindsay Lohan would want to hang out with him even WITHOUT the the 23 bottles of Cristal he once sent her at 1Oak. Perhaps Megan Fox actually digs the slightly chubby, bespectacled look, and would have flown to Las Vegas on SouthWest, had he not paid to fly her over.

But we doubt it.

(The above picture is actually of a music video being shot. So it's actually WORK. Just like you are doing right now. Totally same thing.)