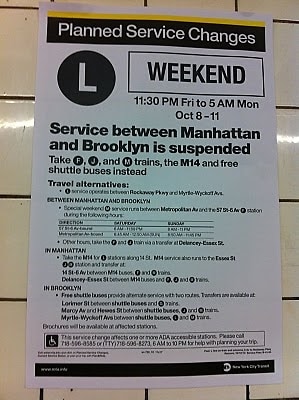 True to maddening form, the service suspension was announced sans explanation from the MTA. The train shuts down at 11:30pm Friday, which is just around the time weekend revelers from Manhattan and Brooklyn have helped themselves to enough liquid courage to stomach trips to that strange land a whopping five minutes across the East River.

The L train is easily mocked. It cuts through several distinct nightlife zones populated by rowdy youths as it shoots straight along 14th Street in Manhattan, from the glitzy Meatpacking District to the ratty/fratty East Village, and then burrows into North Brooklyn, with stops in gentrified indie rock zone Williamsburg, still-"emerging" Bushwick (whose western reaches resemble Williamsburg before an annual beard shaving) and less irritating and crowded points east.

Social anthropologists take note: this weekend's nocturnal milieu along the L train-axis could make for an interesting field study. Will outsiders stay away, leaving a more authentic Avenue B and Lorimer Street to the natives? Will the vibes stay the same, suggesting there's not so much swapping after all? Do the truly noxious weekend warriors all travel via the PATH?

Bearing the brunt of the shutdown are people who ride the L to get to and from that thing called work. Good thing for them, service resumes 5:30am Monday, when very few people under 30 who live by an L station will have finished sleeping off their weekend hangovers.