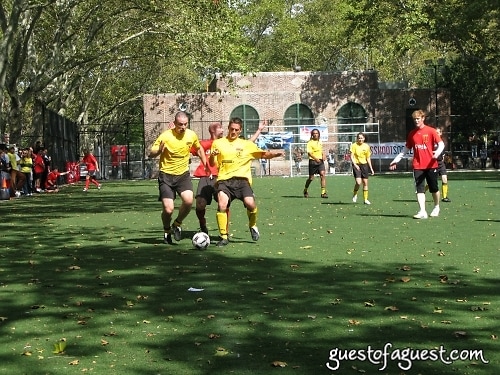 If you're free for lunch come on down to Chinatown, and watch lots of cute guys run around in shorts! (if you like that kind of stuff - Rachelle and the interns left me in the office to go watch). The soccer match is between Grassroot Soccer UNITED v. Hollywood United FC, marking the halfway point of Ethan Zohn's journey from Boston to NY (while dribbling a soccer ball!) to raise awareness for Grassroots Soccer.  The teams will consist of:

The "pro" soccer talent is unbelievable, with European and American stars. As important as the cute guys is the cause they are playing for. Grassroots Soccer provides African youth with the knowledge, life skills, and support to live HIV-free. After the game, the whole crowd is heading over to Marquee for the 1st Annual New York City Gala. Online ticketing has closed, but you can still buy tickets at the door of Marquee ($125/Individual and $200/couple).