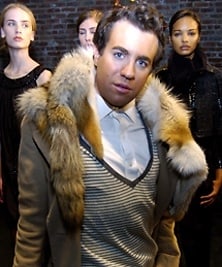 [Kristian Laliberte. Photo via Radar] via guestofaguest.com: As there is always two sides to a story, we knew it was only a matter of time until information from the other half of the Laliber-Gate scuffle that occurred at Georgica Restaurant & Lounge came out of the wood work. According to few anonymous tipsters, the big-spending club goer was simply being protective of his booze that Kristian helped himself to without permission. This prompted Kristian to pull the "Do you know who I am?!" card when asked to leave the table which of course, is when the fun came to an end and when Kristian got to tweeting. While no behavior justifies blurting out homophobic slurs, it appears as though there's a lot more to this story that needs to be uncovered. So who was really out of line?... MORE>>>