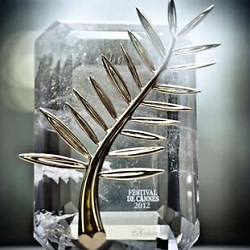 As America donned white attire for the beaches, barbecues and movies of Memorial Day weekend, France concluded its own pre-summer celebration: the 2012 Cannes Film Festival. This year's top honor, the much-coveted Palme d'Or, was awarded to Austrian director Michael Haenke for his film Love.

Starring veteran actors Jean-Louis Trintignant and Emmanuelle Rivahe, this French-language film tells the moving story of an elderly couple whose relationship is challenged after one of them suffers a debilitating stroke.

So far, the reviews of Love have been glowing. The New York Times' Manohia Dargis called it a "tender, wrenching, impeccably directed story of love and death," while Entertainment Weekly's Owen Gleiberman speculated that it is "perhaps the most hauntingly honest movie about old age ever made."

Sounds Love-ly! Check out the trailer:

This is the second Palme d'Or awarded to Haenke, one of Europe's most highly-regarded directors, who won the top prize three years ago for The White Ribbon, a dark drama about a pre-World War I village in northern Germany. If Haenke's record is any indication, we may see Love again as a contender for an Academy Award.

Also of note: the Cannes jury awarded the Grand Prize to Matteo Garrone's Reality, an Italian drama about reality television, and the Jury Prize to Ken Loach's The Angels' Share, a film about redemption through whiskey.

For more information on the festival and its participants, go HERE.