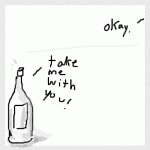 Okay, I know I just waxed rawther enthusiastic over Lenndevours, but one of his posts deals with where one can byob on Long Island. At school, this was often one of my friends and my restaurant criteria, but I haven't noticed anyone doing likewise out here. Indeed, none of the entries on Thompson's list or in his commenters' suggestions are located on the east end.

I understand why restaurants want liquor licenses, as beverages often provide the bulk of the profits, but, I know that at least in the city, these licenses are hard to come by. With so many affordable local wines, byobing seems like a very appealing way for diners to cut costs. Is such a thing possible? Are there any license-less establishments I'm unaware of?