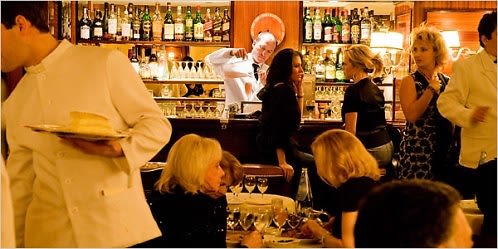 New York Times food critic Frank Bruni made our mornings today.  In his piece titled "The Gloss of Opulence", Bruni had a jolly old time picking to shreads the lastest "in-the-news" Cipriani establishment, the Sherry-Netherland Cipriani on 5th avenue.  Giving it the poorest rating allowed (zero stars), here is how he opened:

"Over the years the Cipriani restaurant family and its employees have faced charges of sexual harassment, insurance fraud and tax evasion, the last leading to guilty pleas by two family members in July.  But the crime that comes to mind first when I think of the Ciprianis is highway robbery.  Based on my recent experience, that's what happens almost any time Harry Ciriani on Fifth Avenue serves lunch or dinner."

Ouch.  He then goes into detail on the ridiculous priced items, joking that it would be tempting to devote the rest of the review to a price list because "Nothing else I can present is nearly as compelling."  he goes on...

"It's a bizarre mix of indulgence and deprivation, the crisp white jackets on the servers communicating an ostentation that's contadicted by plenty else."  He does a great job of pointing out how cheap the Cipriani's establishments are, paying attention to details:

"Even in an enclave this expensive, there are things seemingly done on the cheap.  I can't think of a credible motive other than cost saving for serving an appetizer of turkey tonnato in place of veal tonnato.  That's for $27.95.  Although steak Rossini typically involves foie gras, what Harry Cipriani puts on top of a gigantic (and, it should be noted, juicy) filet mignon are chicken livers, chalky when I had them." And, our favorite: "The selection of wines by the glass-a small carafe, really-is pathetic, and that fabled bellini is $19.95 for a restrained ration of white peach juice and prosecco."

(We have always wondered why our friends RAVE about their bellinis, we have never been impressed by it there, it's been watered down 99% of the time).  Though later on today eater.com pointed out that the resturaunt is "doing just fine" because no one who actually eats there cares that they are spending that much anyway... And in a way, Bruni agrees with them ending the article with:

"But the people-watching is nonpareil.  You rarely see blondness this imporbable, cosmetology this transparent, wealth this flamboyantly misspent."

We couldn't agree with him more, and think that the Cipriani's may become the new Nello Balan for rip-off restaurantuer of our time.