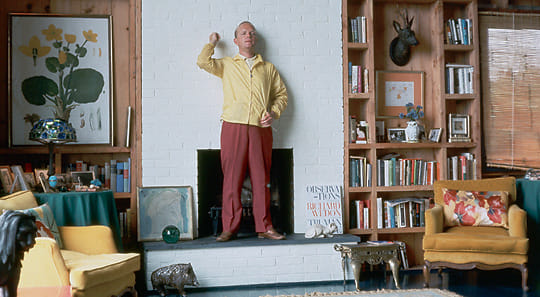 Hampton Style has an excellent article about the house of long-time Hamptons character Truman Capote (whose Breakfast at Tiffany's inspired our sister site's original nom de blog).  Like so many of us who spend time out East, he loved his time there, because it was

Capote commissioned the house in 1961, and decorated it himself, he was always quick to remind people.  When he was "at work", he would spend 5-6 hours a day in the comfortable second-floor study.  Other days might be devoted simply to walks on the beach with his bulldog, errands, and maybe a dip in Gloria Vanderbilt's pool. Today, another great Hamptons personality, artist Ross Bleckner, resides in the cottage.

"And what would Capote have made of the Hamptons today? "There was a different sort of society out here then," says Gerald Clarke, the executor of Truman's estate and one of his biographers,"and it was so much quieter. Who's out here now? Rock stars, movie stars... It's a publicity society." On second thought, Clarke muses, perhaps it would have suited Truman just fine. In the '70s he hobnobbed with Andy Warhol and the Rolling Stones.

"Who knows? If he were still alive today, he might have been at the center of P. Diddy's latest party, making little asides...taking it all in."