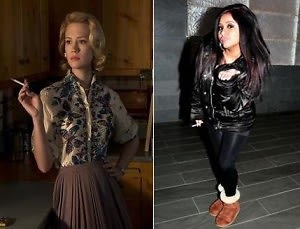 It's a big week for TV shows set in the New York area that, for better or worse, became cultural phenomenons. Mad Men (for better) and Jersey Shore (for worse) are back! Despite vast differences in setting, tone, production values and general quality, the heroines of the series have more in common than you think.

Betty married and will soon divorce a man who lives under an alias, Don Draper (fka Dick Whitman). Snooki diddled a man in a hot tub who goes by an alias, The Situation (aka Michael Sorrentino).

Betty once had cheap anonymous sex in a bar. Snooki was the victim of a cheap shot when an anonymous stranger punched her in a bar.

The actress who plays Betty (January Jones) hosted one of last season's most forgettable episodes of SNL. The actor who plays Snooki (Bobby Moynihan) on SNL had some of the show's few memorable moments last season.

Betty displayed surprising proficiency in Italian while on a glamorous Roman holiday. Snooki pretends to be Italian, is fluent in guido.

We'll have to wait and see if the characters of Betty and Snooki converge during their series' new seasons or splinter apart. And we can only hope that the number of people watching Mad Men (2.3 million for last season's finale) catch up to the 4.8 million who tune into Jersey Shore.