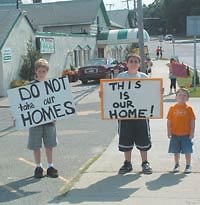 Syosset Mobile Home Park to be razed because its inhabitants are "mostly white, hard-working, middle-class people," instead of minorities. Hmmm. [Long Island Press]

How inspiring is this pooch? My heart is melting. [27East]