Christina Aguilera got the National Anthem right when she was 11, not so much at 30. Arianna Huffington was the true winner of the Super Bowl, and Nick Denton called me a "nasty piece of work" (!). But I'd rather be a piece of work than a blank screen. Gawker's redesign launch today is an epic fail. Also, check out my partner, Cameron Winklevoss and his brother Tyler on the Daily!

1. "You know who won the Super Bowl? Arianna Huffington."[TechCrunch] The announcement of AOL purchasing HuffPo for $315 million (300 in cash, 15 in stock) came MINUTES after the Green Bay Packers beat the Steelers in the Super Bowl. I have never seen my Twitter feed shift from one big event/story to a totally different one in the lightening speed manner it did last night. Nat Ives was thinking the same thing. Below, some bits you may be interested in:

"The arrangement will give her oversight not only of AOL's national, local and financial news operations, but also of the company's other media enterprises like MapQuest and Moviephone." [NYT]

AOL explains the deal to the [WSJ]

Tim Armstrong's internal memo to AOLers about the deal. [TechCrunch]

Tim and Arianna meet for lunch, the next thing you know they were completing each other's sentences. Read more about the "merger of visions." [HuffPo]

2. Gawker redesign fail. Nick Denton, the man who is constantly complaining about the media's coverage of "non-news" items is also, ironically, the topic of more non-news items than any single NYC media figure. The redesign is getting criticism from most in-the-know-NYC-media-club-kid types. Like Rex Sorgatz who has issued an open bet that Denton would eventually retreat from the redesign. Denton vowed to "clean him out" and Sorgatz has officially taken on the bet:

"Official terms of the bet with Denton: We will check Quantcast on October 1, 2011. The goal is 510M pageviews/month. It's $10 for every million over/under. [So $600 to me if it's 450M.] If the design reverts to the old format, he forfeits and pays out $1000. (Lockhart is the arbiter of what constitutes "design change."). And finally, the money handover is to be done in public and photographed. So bring pies." [CityPages]

The best part of this story up on City Pages is the category title they used: "Media is evolving" Really? This is what media evolution looks like? (gulp).

Valleywag is redirecting to Gawker content, and has no new postings leading many to speculate that Denton canned the site entirely (nope, just another glitch! phew.) [@antderosa]

"The main thing to know about the Gawker redesign is that the little icon at the top takes you back to the old "blog" view. [@patkiernan]

And finally, this is pretty funny: "This is what Denton's entire Twitter feed will look like for the next  few days-him responding to people bitching about the site redesign-which might be indicative of a problem." [Cajunboy] 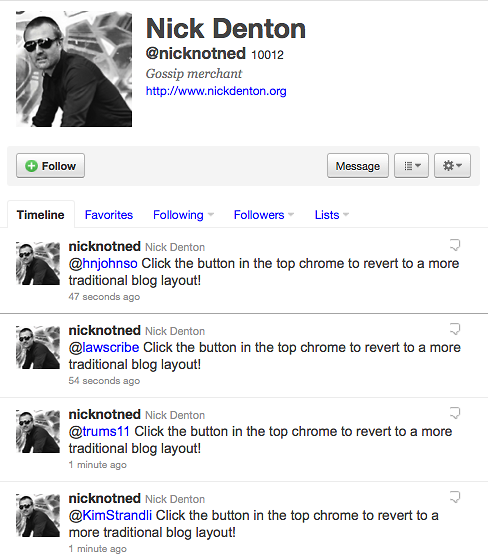 In other news, Denton called me a nasty piece of work in an interview he did with the Atlantic this weekend. I'm oddly flattered. [RachelleHruska]

3. The Super Bowl recap. Disclaimer: I didn't watch. I got all I needed to get from Tumblr on the ads and music performances. Also, my man was on a plane during the entire Super Bowl, which made me happier than he can even understand. Here are some things I enjoyed looking at: 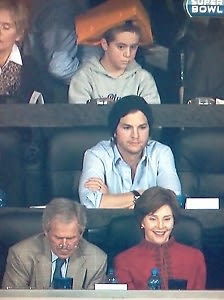 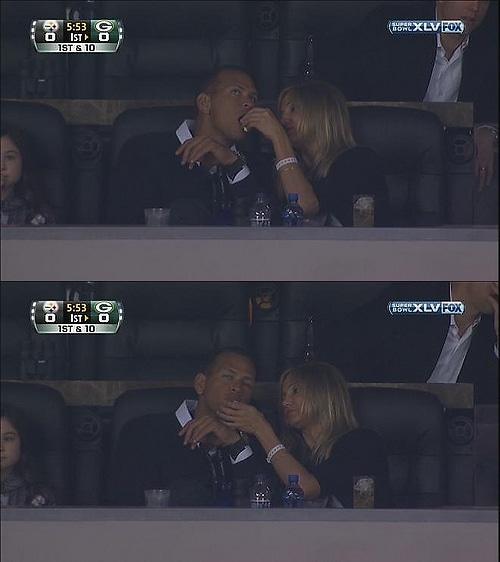 Two interesting facts about the Super Bowl: Packers head coach Mike McCarthy is originally from Pittsburgh, and the Steelers "terrible towels" are manufactured in Wisconsin. [SimplyJess]

Christina Aguilera screwed up the words to the National Anthem and didn't even realize it until later. When she was 11, she got them right:

The commercials. Groupon had a HORRIBLE, (and I mean really horrible) commercial. Go watch, cringe, and read about the backlash it drew here: [WSJ] My favorite commercial went to Chrysler for "Imported from Detroit." Using hometown hero Eminem, the car company presented this touching tribute:

However, the general population, didn't even place this ad in the top 10. Check out the ads from last night that scored the highest. There was a tie for #1 by Doritos (dog's revenge for Doritos teasing), and Bud Light (Dog sitter puts dogs to work). [USA]

4. This is one of the best things I saw today unrelated to Huffington, Super Bowl, or Gawker. In other news, welcome back everyone outside of the dense media bubble I'm operating under: The Krispy Kreme Challenge: Four Miles, Twelve Donuts. This weekend, in Raleigh, NC, 7,500 people ran a four-mile course while stopping to eat a dozen glazed doughnuts halfway through! [Eater] 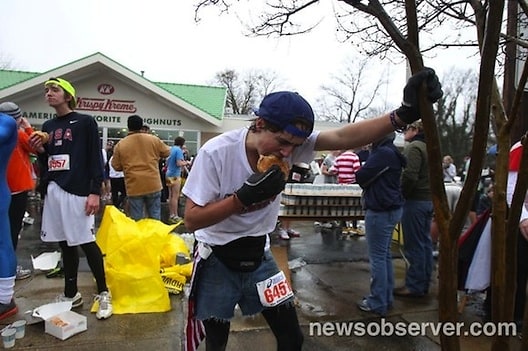 5. Eqyptian columnist Mona Elthaway responds to Bill Maher asking if the protests in Cairo and Alexandria are representative of the entire country. In short, yes. [InOtherNews]

8. Katie Couric made a cameo on last night's Glee. A fitting show to follow the Super Bowl ha. It's not my thing, but she was apparently really psyched about the chance to brag to her daughters: [photo via ION] 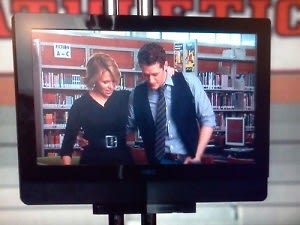 @katiecouric: What fun would a #GLEE cameo be if I didn't get to brag about it to my daughters?

9. Do you see that little blue speck? That is our universe. The image below shows the size of the expanding broadcast bubble that we have been channeling through our radio waves for about 100 years, announcing our presence to the universe. SOOO cool. [Mhudack] 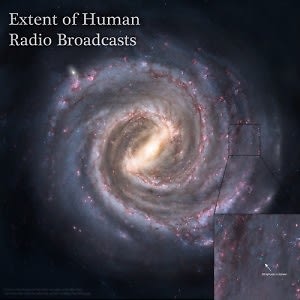 10. ThredUP, a website for swapping hand-me-down clothes is now aiming to swap ideas. The company announced today that it has acquired "momologie" a site started by two former Martha Stewart editors, and plans to make mommy content available for a price. [Mashable]

12. I missed SNL this weekend. Dana Carvey was host and apparently the Biebs stopped by: [ION] 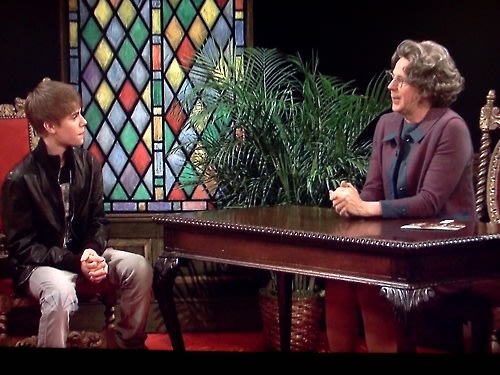 "I have to say that seeing you in person is affecting me in a way I didn't think it quite would."

13. Check out a list of the most expensive paintings. [Hyde]

14. Spike Jonze’s partnership with Arcade Fire isn’t over yet. After first teaming up for the video to the groups single, "The Suburbs," the filmmaker is about to showcase a short film featuring the band. According to Pitchfork, Scenes from the Suburbs is a short 30-minute piece making its debut with four screenings at the Berlin Film Festival. [NYLON]

16. "Clocks" by Christian Marclay. I had a chance to check out this incredible video installation at the Paula Cooper Gallery this Saturday and strongly urge everyone else to try and do so. Read more about the 24-hour timepiece that "ticks off the minutes - and sometimes the seconds - of a full day, using thousands of brilliantly spliced-together film clips from all kinds of movies" here: [NYT]

17. Last week we got the news that MTV was bringing back Beavis and Butt-Head. Today, I got the chance to read Foster's post on if B&B would just grow up already....They should be about 33 by now. [Esquire] 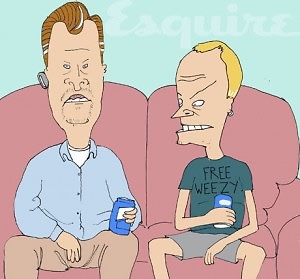 18. Look closely at this snowbank, off of 6th avenue. Do you see Darth Vader? [InOtherNews]

19. Speaking of snow, we are definitely in the mushy gross phase of the snow storm cycle. Check out this photo I took from the Meatpacking district this weekend: 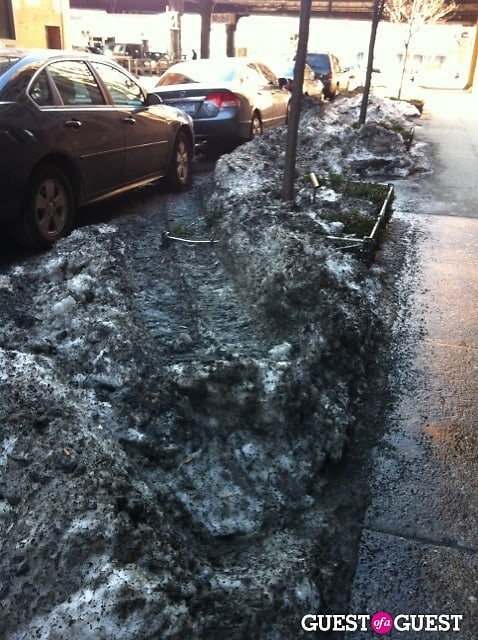 20. I'm a Pisces, which makes me....Snow White? Hmm. Not sure about that, but go find out which Disney princess you are based on your sign. [Stacykfuller]

21. Really like this look at where "we" were, where "we" are, and where "we" will be. Where will the next Nirvana come from ??? [NedHepburn]

22. Remember that video that surfaced of a 1994 Today show exhibiting extreme ignorance about the Internet? NBC fired the guy who uploaded it to YouTube! So not cool. [TechDirt]

23. Wooden nest bed found in NYC. I wish we had this in office! [Minilaarni] 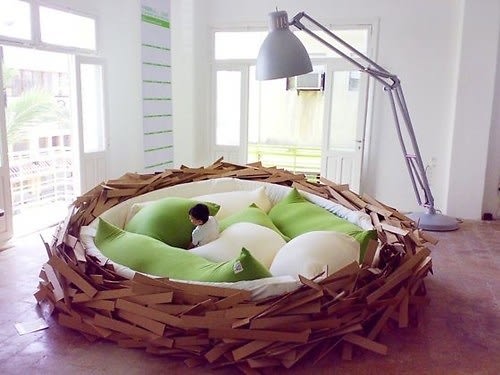 24. Cameron (my partner) and Tyler Winklevoss are going to be on Rupert Murdoch's "The Daily." Check out video here:

Well, that's all for me today. Do you have something that you want to see in tomorrow's Reading List? Email me: Rachelle@guestofaguest.com.