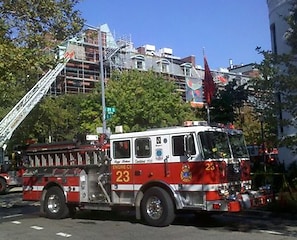 As we previously reported, a fire broke out around 8:30 a.m. yesterday morning in the ceiling of the fourth floor at The Phillips Collection in Dupont Circle. Although there was heavy black smoke that spread throughout the galleries, the artwork was seemingly unharmed. According to staff members at the museum, they were more worried about water damage from the sprinklers then of smoke damage. (We now learn that there was minimal to no damage at all.) In addition, the rooms below where the fire originated were office space and no where near any of the artwork. Firefighters said that there was no injuries or structural damage to the historic building and Dorothy Kosinski, the museum's director, noted that "All of the artwork was removed in a very timely fashion."

According to the Washington City Paper, "D.C. Fire and Emergency Medical Services tweets that the Phillips House at the museum incurred about $250,000 in damage. The Phillips Collection cannot confirm that figure right now."

The building was in the midst of undergoing a facelift as the exterior is covered in scaffolding.

For those of you who had Labor Day plans to visit the collection, think again. According to the museum's web site, The Phillips Collection is closed until further notice.