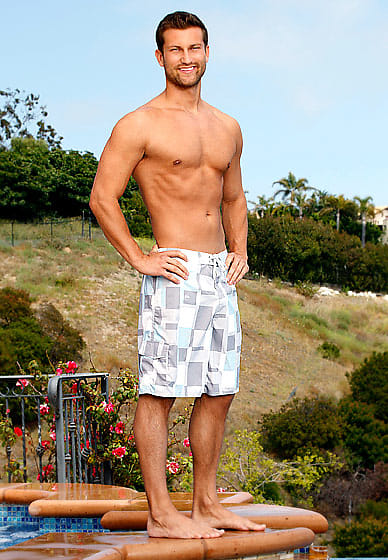 Hunky Chris Bukowski, who reached fame as a contestant on the Bachelorette and Bachelor Pad 3, is set to open up a sports bar in Clarendon this summer. Single, twenty-something females rejoice! (...And you are very welcome for this shirtless shot)

Bukowski, 25, decided to name the new bar Bracket Room after a public voting scheme including other options like In Theory, Change Up, and Topher. After establishing quite a womanizing and uber-confident reputation on last season's Bachelor Pad, we wouldn't have been surprised if he had chosen to name his new project after himself with "Topher". Just saying.

Bracket Room will take over the locale where Burapa Thai once stood at 1210 North Garfield Street. "Chris is redesigning the way the sports bar is perceived with hip, female friendly, modern, fresh food and drinks with a twist," a rep said. Key words: female friendly.

Rumors are swirling about whom the chef will be with names like former Top Chef contestatant and Good Stuff Eatery's Spike Mendelsohn in the mix, but an official announcement has not been made.

Bukowski tweeted that the opening date is set for sometime in July. If you are an avid fan, head over to the Bracket Room's Facebook page to participate in a "Shots Madness" bracket. Keep your eye out for blue-eyed Bukowski, because last we heard he was single and already charming the young ladies of DC...