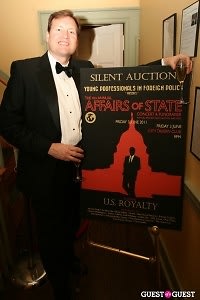 After keeping mum since the incident happened last fall, a few articles emerged this week discussing Robert Dyer's finger getting chopped off by a door at Smith Point. Robert's lawyer claims Robert was overserved before coming to Smith Point, and fought with the bartenders about the minimum credit card charge, and lost his finger when they kicked him out.

[photo: Robert Dyer with two glasses of champagne at an event]

Since I love Smith Point to bits and everyone knows this, and I was somewhat integral to the evening, I decided to answer a few questions that keep popping up in my inbox:

1. Where did he get these "7 cocktails" from? Robert Dyer started the night off at the Washington Ballet Prohibition Ball on September 30. Open bar. I was there taking photos, and my friend Ava Deylami was there too. Robert recognized me as the DC GofG chick, and suggested we go to Pharrell's Qream Liqueur launch party. There were lots of samples of the drink available at the party. Here he is drinking some of it.

2. What was a 40-something doing at Smith Point? I told Robert that we might end up at Smith Point, but Ava and I wanted to see our boyfriends first at a small house party, and it would have been inappropriate to arrive with a much older acquaintance at this particular house party. Ava and I did not ultimately go to Smith Point.

3. Is Smith Point doing away with its minimum tab? Right now, uber-uber-regulars don't deal with the minimum tab rule...but we all know now that drunk 40-somethings get no leeway. One thing everyone learns quickly at The Point--you don't have to "order seven Coca-Colas." Your bill will automatically just be $30. Buy drinks for others or bring cash!

4. He ordered an RBV with three shots of vodka? Allegedly he did, to meet the $30 limit. Technically that is a "Triple RBV," but perhaps we can turn lemons into lemonade and come up with something more creative, like the "Door Slammer" or the "Finger Blast."

5. Who goes out with less than $12 cash? Robert Dyer, apparently. Maybe he was planning on walking home that night.

6. It must have hurt getting those iron doors shut on a finger. Not so fast. A bouncer told me that it was slammed in "the side door" on Wisconsin, not the scary iron doors on O Street. Thank goodness, he could have lost his whole hand on the iron doors!

In short, we wish Robert Dyer, the "cocktail party animal," a speedy recovery and warm welcomes from bars with no minimum tabs.