Let's face it: Camelot and Archibald's just don't cut it.  While some claim the steak at Camelot is really quite tasty, there's no way the dining experience there is as exquisite as it is at D.C.'s newest strip gentlemen's club, Stadium Club.  And we judge strip clubs based on the food, just like men read Playboy for the articles.

Just north of the intersections of New York Avenue and Bladensburg Road NE, Stadium Club has been open since late April.  While strip clubs are certainly not known to be classy spots, Stadium Club does everything in its power to make you forget the typical griminess associated with nudie joints.

One of the best features of Stadium Club is its restaurant.  The executive chef, André Miller, is the former regional director of Ruth's Chris.  And the restaurant's general manager, Jalel Azaiez, used to work for Hilton and Marriott in their events and restaurants departments.

While it is all well and good to have a high class dining room and menu, the strip club part of the club is also, of course, important.

That's why Stadium offers something for everyone: from your Joe Shmoe who spends his Tuesday afternoon's at strip clubs, to high ranking politicians who love them some naked ladies, but prefer not to be seen. 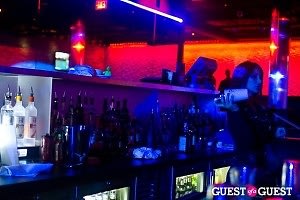 For Mr. Shmoe, Stadium has the "field level" which is the ground level seating area right when you walk in.  Here, tables can be acquired without bottle service per se, but you're expected to ring up a healthy tab.

But the real kicker is the private box option.  Tucked away in the back, where you wouldn't know they existed unless you were told, are private suites.  The glass walls can block outsiders from looking in, or allow them to do so if need be.  The boxes each have their own flat screen TVs, personalized volume and light control.  If you see a dancer you like, you can tell either your waitress or the muscle and said girl will come give you a private viewing.

The rooms run around $3,000 per hour.  And despite the recession, those rooms are going like hot cakes.