As summer starts to draw to a close, we realize that the days of our farmer's markets are numbered.  So we want to get you acclimated to all your dirty-hippie farmer's market options before they're closed for the year.  This week, we take you to the White House farmer's market. 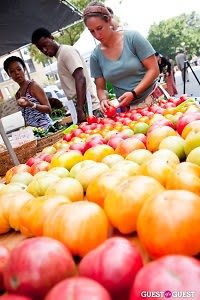 Michelle Obama wasted no time opening the market--Barack was sworn into the Presidency in January 2008, and the White House Farmers Market first opened in September 2009.

Open through November 18 for this year's season, MObama's role in the White House Farmers Market coincides nicely with her vendetta against childhood obesity.  As people get to know their food better, they also get to know their bodies better.  Our bodies like fresh fruits and veggies, not Pop-Tarts sushi.