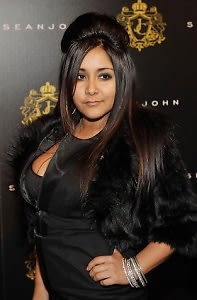 It was just a few weeks ago that the hilarity of John McCain tweeting Snooki ensued revealing the Jersey Shore star as a McCain fan and McCain's beliefs on tanning beds. John McCain knew exactly who Snooki was when he got word of her preferred presidential candidate for the 2008 elections, which aired in the preview for the second season of Jersey Shore during the MTV Movie Awards. The senator's daughter, Meghan McCain, suggested he tweet to Snooki to respond to her on-air remarks.

Apparently it's true that the apple doesn't fall far from the tree because Meghan McCain also confessed her love for the ridiculous show, and interviewed Snooki recently to find out more about the now spray-tanned guidette and her views about right-wing politics.

When McCain asked Snooki about her party affiliation and her views on politics, we can't help but chuckle at McCain's belief that she would receive an intelligent answer. We're surprised Snooki even knew there were other options when registering to vote...

"To be honest with you, I’m not really a Republican or a Democrat. I actually signed up as an independent, just because I don’t want to pick any side and also I don’t really know a lot about politics."

Snooki's answer to McCain's question of who her role models are truly solidified our belief that the Jersey Shore is truly the dumbest show on earth.

"I wouldn’t say a role model, but I do admire Kendra Wilkinson and Tori Spelling," 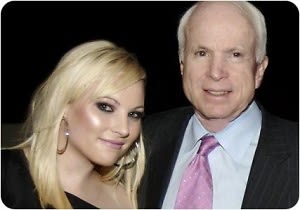 responded Snooki to McCain's role model question. And if you thought it couldn't get much worse from here, Meghan McCain replied saying she too loved Tori Spelling.

Up next for the McCain father-daughter trashy TV loving duo? GTL.