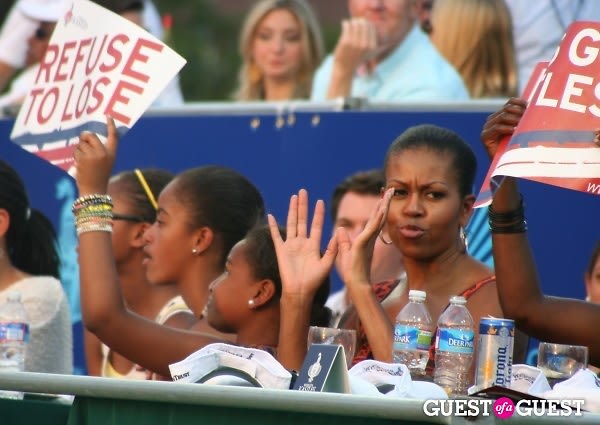 The Washington Kastles, our World Team Tennis (WTT) franchise are giving DC fans something to get excited about. Not only do they have a beautiful new waterfront tennis stadium; the team is winning. They’re the most recent Washington team to win a title (2009), and are one of the hottest tickets in town this summer.

...So hot, that first Lady Michelle Obama was there, front and center, with daughters Sasha and Malia this Thursday night. 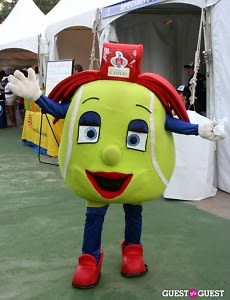 GuestofaGuest overheard a ticketholder (or one of the many soon-to-be disappointed fans in line waiting to see if there were still available tickets) say that the First Lady might be in the stadium, but it was only until we were seated next to a handsome young gentleman with a cord in his ear, wireframe Oakleys, and a black polo perfectly tucked into kakhis that we realized someone important might be in the stadium.

Indeed, all eyes were on the Obama ladies tonight; Malia just celebrated her 13th birthday (Monday) and her younger sister Sasha excitedly held up her "REFUSE TO LOSE" poster. We couldn't help but notice that little Sasha fancies pearls and had about 15 friendship bracelets propping up her tiny wrists. Michelle appeared jovial, chatting with a friend to her left and hugging her daughters when the game got exciting.

The Kastles, named for owner Mark Ein’s Kastle Systems, have some international names of their own: Venus and Serena Williams both play for the Kastles this year, who entered tonight’s match against the Boston Lobsters at 2-0. After some great tennis, Serena answered questions from a handful of kids in attendance, even correcting one’s grammar, to the audible enthusiasm of many Washingtonians in the stands. 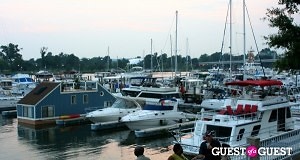 The Kastles have all the right pieces in place for a great franchise to survive, chief among them being a brand new and beautiful stadium right on the banks of the Potomac; one can even park a boat and enter the stadium via the Warf.

The Kastles also have a growing fan base excited for great tennis in the nation’s capital aside from the Legg Mason Tennis Tournament, which comes to D.C. in August before the U.S. Open Grand Slam.

The Kastles head out of town for a three-match road trip, but return to Washington again on July 12th. Then, they’ll play host to John McEnroe’s New York Sportimes. McEnroe has always been known for his temper. Kastles fans may remember McEnroe’s 2009 visit to Washington, when he reportedly lost his temper and confronted Leander Paes after a hard volley hit McEnroe’s teammate. 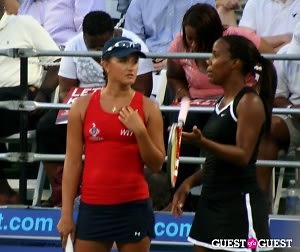 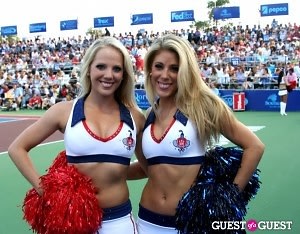 Washington really needs a winning franchise. The Washington Redskins have not won the NFC East title since 1999. Yeah, the 90s. The Capitals have an all-star lineup, including arguably the game’s best player, but have never won the Stanley Cup. The Nationals have an awesome new ballpark, but are still developing as a relatively new franchise. The Wizards have little room to go but up, having won only about a quarter of their games in the last three years. If you’re a DC sports fan today, you have the unfortunate task of sticking with DC teams during the ongoing dark ages.

There is, however, a light of victory shining amidst the DC sports despair: the Washington Kastles. 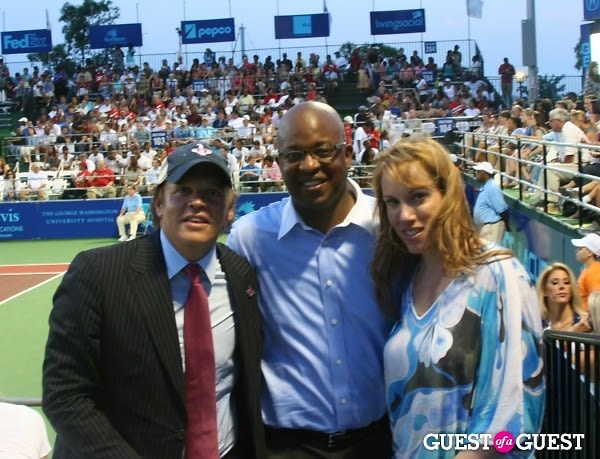