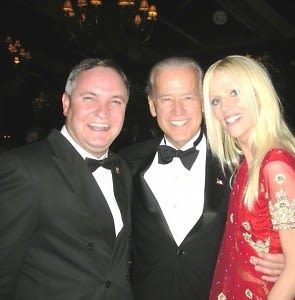 The Real Housewives of DC's July premiere is fast approaching . . . and in case you haven't heard, Michaele and Tareq Salahi, the infamous White House crashers, are officially onboard! BUT WHY WOULD BRAVO LET SUCH LOATHSOME, FAME-HUNGRY PEOPLE ON THEIR TV SHOW?

Kidding. We all saw this coming. However, the Daily Beast recently reported that the couple has “been fully embraced as the focal point of the series."-

That means it's going to be all-Salahi all the time. Of course, as Andy Dehnart over at Reality Blurred notes that there was no way the footage from the White House state dinner was only "test footage", just as there was no way Bravo would give up its front-runner randos unless they were actually pumping iron in jail. All press is good press, especially in the world of reality tv.

Here's a taste of the Salahi's on video, in case you've forgotten their run-in with a terrified will.i.am. We're still not sure why. It's some sort of po-mo statement-thing, right?

Not that Bravo is blaring about the Salahis to the heavens just yet; although they announced the Real Housewives of Beverly Hills, they haven't made a formal announcement or publicity push for RHoDC at this time. In fact, the network likely won't do so until May 27, when the Salahis are scheduled to wander onto the Today Show set, and pose with oblivious television personalities. The networkis actively shopping for advertisers, hoewver, according to the Beast. Might we suggest that some sort of private security firm/alarm system/electric fencing company sign on as a top sponsor?