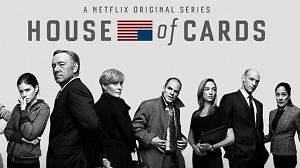 We've said it before and we'll say it again: TV and DC go hand-in-hand. Emmy nominations were announced this morning and there is a lot of DC (and politics) loving going on.

After being the most buzzed about show in Netflix history, House of Cards continues its reign by racking up nominations including Outstanding Drama Series and noms for Kevin Spacey and Robin Wright.

In the comedy spectrum, Veep's Julia Louis-Dreyfus, Tony Hale, and Anna Chlumsky all received nominations for their roles. The series also got a nom for Outstanding Comedy Series. No matter what people say, this town can be funny.

Political Animals picked up a nomination for Outstanding Miniseries or Movie as well as it's star vehicle Sigourney Weaver. Kerry Washington's work on the salacious Scandal got recognized as well (admit it, you watch it) while Jeff Daniels of The Newsroom got a nom for Outstanding Lead Actor in a Drama Series. And, of course, Homeland shoveled in nominations by the boatload. I hope Claire Danes wins again so we can see if she actually cries like this.

And I really think that one DC-episode of Parks and Recreation really got Amy Poehler her nomination.

Check out the rest of the nominations here.