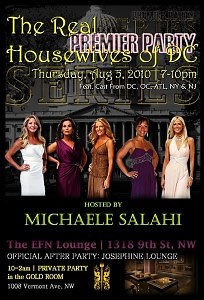 While some of us might be disinclined to fête it up with a woman whose greatest claim to fame is supposedly crashing a White House party, others might feel the complete opposite: being near Salahi is kind of like being near Obama, right?

Hey, look: whoever designed this flyer misspelled "premiere," just as it was misspelled on the Salahi media sponsor blast.

Anywho, we wonder if Mary, Lynda, Cat and Stacie (and Bravo for that matter) are aware that their images have been cropped and pasted from the official Bravo Real Housewives of D.C. bios to promote a party for profit? 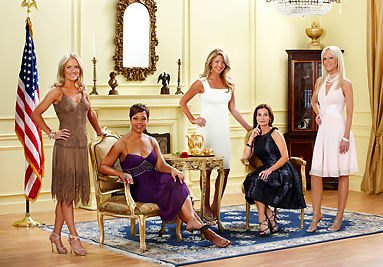 Lynda is the only one who committed a wardrobe change between this group shot and the individual bios from which the Salahi hosted flyer sourced its images.