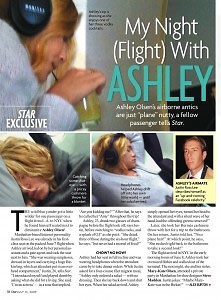 [Screenshot of the "JRL" Star magazine article. Remember these Olsen photos? They've been on GofG for over a month]

The ever credible Star magazine (of which Julia Allison served as an editor-at-large) came out with a story about our favorite "facebook celebrity" and boy-about-Hamptons, Justin Ross Lee last week. And apparently, it was a "Star Exclusive". What Star forgot to mention, however, in their interview with JRL about his "jew-jetting" experience with Ashley Olsen that took place a month ago from LAX to JFK, was that GofG already wrote about it - last month. Complete with the same Olsen twin photos we already used.

Not so exclusive, huh, Star?

Maybe you should watch your advertising ploys next time, considering not only was the information in the interview already plastered all over his Facebook, but also in our June 12th article entitled Introducing Justin Ross Lee: The Latest GofG Hamptons Feature. We don't expect much from a magazine that makes their sales off celebrity cellulite and poorly shot paparazzi pics, but maybe next time they should do a little ground work before throwing around the word "Exclusive."